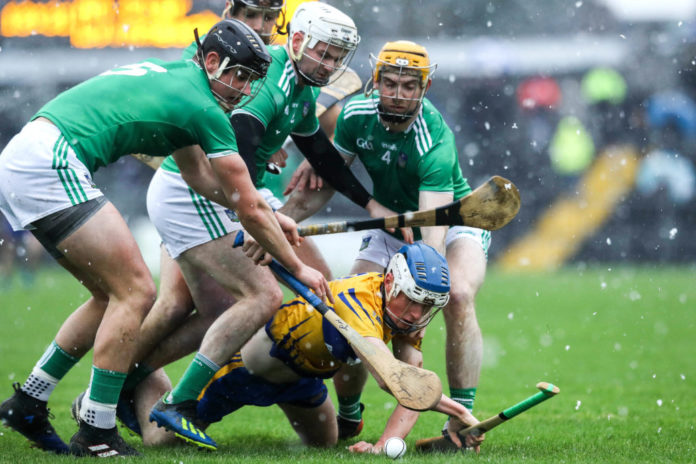 Limerick and Clare played out a 2-11 to 1-14 draw in their Allianz Hurling League Division 1A game at Cusack Park.

The game, which was played in horrendous conditions, was dominated by Limerick in the opening half but two Clare goals after the break saw them ahead in the final stages.

However, two nerveless frees from Limerick’s Aaron Gillane ensured that John Kiely’s side came out with a draw.

Clare made a fast start the game with the opening two points from Tony Kelly and Shane Golden.

Limerick were soon in front, however, when Gearoid Hegarty produced a superb finish to beat Donal Tuohy for a goal after eight minutes.

Aaron Gillane followed up with his first free but that was soon cancelled out by Peter Duggan. That left the s core at 1-1 to 0-3 with 12 minutes played.

Limerick continued to be the more prominent side as the half continued with Cian Lynch dominating midfield.

John Kiely’s men finished the half with four points on the trot – a ’65 from Colin Ryan and one each from Paddy O’Loughlin, Peter Casey and another Gillane free that saw them 1-7 to 0-6 ahead at the break.

Clare reduced that lead to a point when Shane Golden eased through the Limerick defence and hit a low shot past Nickie Quaid.

Gary Cooney then levellled the game with a well taken point but two points each from Gillane and Casey saw Limerick 1-11 to 1-7 up with 47 minutes on the clock. Casey’s first came after Gillane’s penalty was saved by Tuohy.

Clare roared back into action with three on the bounce and then a Peter Duggan goal put them two ahead before Gillane’s injury time double rescued a draw for Limerick.