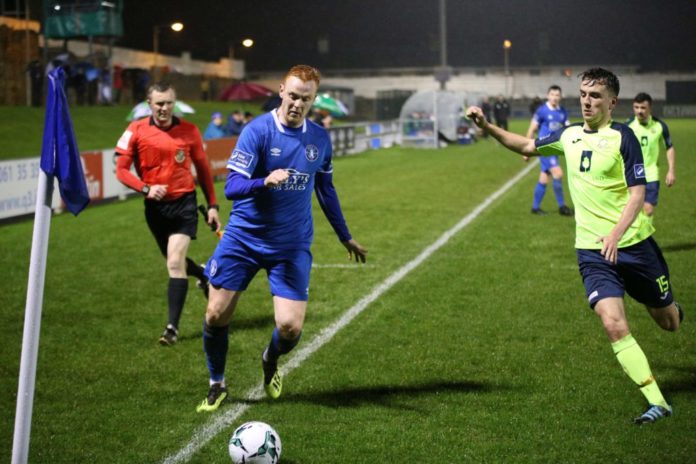 Limerick FC travel to Stradbrook Road, Dublin on Saturday afternoon to take on Cabinteely in the Airtricity League First Division (2.30). Limerick will be looking to build on last week’s 3-1 win over Cobh Ramblers.

Tommy Barrett’s men are currently 6th in the table on five points having lost just one game from four.

Supporters were relieved to see the club open up their scoring account for the new season with two goals from the impressive Kieran Hanlon and one from Conor Ellis’ superb solo goal.

Limerick began with a 3-5-2 formation last week before switching to a 4-4-2 midway through the first half, prioritising the need to score goals which had been their Achilles heel following two goalless draws and a 2-0 defeat to Bray.

While defensive solidity was sacrificed slightly, the Shannonsiders were much more dangerous in attack and should have had at least two more goals. It was clear the see the relief on the faces of the management and players to get the victory.

Hanlon and Ellis linked up to great effect and as Ellis alluded to after the game, he was ‘crying out’ for a partner for over a year. Although it worked to great effect, it remains to be seen if Limerick can play as freely away from the Markets Field or against the likes of Shelbourne and Bray.

Darren Murphy bounced back from his struggles against Drogheda the previous week with a solid display in central midfield next to Jason Hughes, whose distribution and overall involvement when in possession improved greatly.

Shane Tracy started the game in midfield but swapped with Aaron Fitzgerald who was integral in setting up Hanlon for the third goal. Fitzgerald is beginning to feature a lot more in the early stages of the campaign.

Shane Tracy and Shaun Kelly should recover from knee and ankle knocks respectively to start the game. However, Will Fitzgerald remains on the road to recovery and is expected to be out for at least another month.

Limerick made ten changes for Monday’s EA Sports Cup defeat to Cobh at St. Colman’s Park with the likes of Adam Foley, Ger Barry and Lee Devitt receiving much needed game time. In truth, it was a competition that Barrett could ill afford to give a lot of time too and provided the perfect opportunity.

Saturday’s opponents Cabinteely are fourth in the table with just one defeat from their opening four games, much like Limerick. The Dublin outfit have claimed some notable scalps along the way, notably defeating Shelbourne and Drogheda, both away from home.

Star striker Rob Manley scored a hattrick last week after scoring against Shelbourne. The former Bohemians man will be a huge threat and possesses a lot of pace.

Also, Kieran ‘Marty’ Waters is an experienced player at this level and has a lethal left foot if afforded the opportunity to shoot. Manager Pat Devlin has a wealth of experience after managing Bray Wanderers to several promotions and premier division campaigns.

Barrett admits that he hasn’t seen a lot of Cabinteely but knows how tough the game will be on Saturday and will look at what way to approach the game during the week.

Yeah we haven’t seen much of Cabinteely to be honest. We have only seen them in one game and they look a really good outfit. They are strong and physical but they can play a bit as well. We’ll assess it. We always go out to win but obviously we might not be as open.”