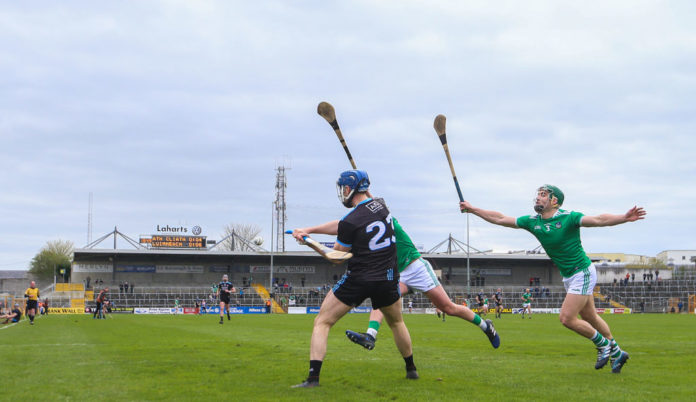 Limerick had to work hard for their win against the Division 1B side who put it up to the All-Ireland champions in the opening half.

Limerick’s superiority told in the second half with Seamus Flanagan’s goal in the 63rd minute the major key to victory.

Limerick led by a single point, 0-10 to 0-9 at the break after a tough opening half with neither side able to dominate proceedings.

Limerick opened the scoring through Darragh O’Donovan with a fine long range point.

Once more Suthcliffe would respond for Dublin as the sides would exchange the next four scores evenly to leave the teams deadlocked 0-4 each after 12 minutes.

Diarmuid Byrnes and Graeme Muclahy would find the next two scores as Limerick looked to gain control in the game.

Byrnes levelled for Limerick but Sutchliffe would notch his third of the half to push Dublin ahead.

Gearoid Hegarty tied up the game once again approaching injury time with Aaron Gillane getting the final score of the half to give Limerick their slender half time advantage.

Aaron Gillane began the second half scoring for Limerick but Ryan would again reply from a placed ball.

Eamonn Dillon and Ryan would reduce the deficit to one.

Peter Casey had the chance to goal for Limerick in the 52nd minute but chose to tap it over the bar after a fine catch from a Paddy O’Loughlin pass before two Gillane frees pushed the lead out to four.

Dublin had a chance to reply from a free but missed. Limerick responded with a beautifully worked goal that was eventually finished to the net by Seamus Flanagan.

Once again Byrnes would find himself on the scoresheet as Limerick’s advantage was stretched to nine with 63 minutes on the clock.

Dublin would get their first score in a quarter of an hour when substitute Ronan Hayes goaled past Nickie Quaid. Cian Lynch would duly reply for Limerick.

Dublin to their credit kept battling and heading into injury time there was just five between the sides.

Sean Moran would point from a free with two minutes remaining to give Dublin some hope but some excellent defending from Limerick kept them at bay from Quaid’s goal as Limerick secured a crucial three point victory.

They will face the winners of Galway and Waterford in the final.