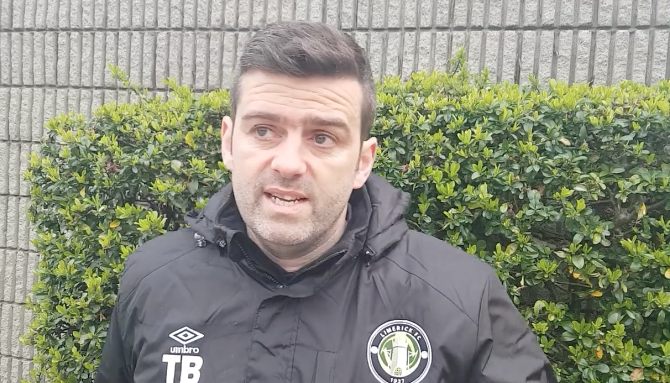 It was a scrappy contest and Limerick opened the scoring through Sean Russell after a great run and set-up by Karl O’Sullivan. The left winger powered his effort past the helpless Stephen McGuinness.

Limerick has two further chances to extend their lead as the lively Conor Ellis picked out Sean McSweeney who’s exceptional close control allowed him to get a shot on goal but the former Regional man was thwarted by McGuinness.

Fellow midfielder Jason Hughes pounced on hesitant Cabinteely defending but he chose to square the ball and it was intercepted when shooting would have been the better option.

As half-time approached, the home side equalised as Conor Keeley rose highest to power a header on goal from a Keith Dalton corner. It took a deflection on it’s way to the net.

A big turning point in the second half arrived when Cabinteely were awarded a dubious penalty as Robbie Williams was adjudged to have taken down Dalton. However, Jack Brady produced a super save to deny Rob Manley.

With 15 minutes remaining, Conor Ellis proved the hero as he capitalised on a mistake from McGuinness before sliding the ball into an empty net

Tommy Barrett speaks below about the victory and the current league standings.