“THEY wanted it for each other because they believed in the unit and the family they had created, all 36 of them”.

Ms Currid, who has also worked with rugby legend Paul O’Connell and the New York Police Department, was addressing members of Shannon Chamber on the six high-performance fundamentals that are transferrable between sport and business.

Citing examples of business and sports teams performing those fundamentals to a high standard, she said that the Limerick hurlers had formed a family unit where each of the 36 players wanted to achieve success for each other.

“They had a purpose, they had honest conversations and they believed in the unit as a whole.

The Sligo native who has worked with four All-Ireland winning teams, said that John Kiely was a phenomenal leader who believed and cared for every one of his players.

“That shows that if you value your people – if people feel valued, they will give it back in bucket loads.

“These are a phenomenal bunch of men but there are some key pieces to the jigsaw that were just incredible and was so well managed.

” I think one of the identities that people associate with the success of these men was that they were doing it for each other and worked so hard for each other as opposed to any individual on that team.”

Although not part of this year’s management team, she said that John Kiely was not managing athletes but people.

“He decided every week he was going to touch base with every player on his panel and when I say touch base, I mean just asking them ‘how are you’ or ‘how was your day’.

“There were ten men in every game who didn’t even get to put on a pair of boots after all the work they had done.

“That’s really demoralising if you don’t value the person in that set-up. He had a great way of doing it because he made sure he took the time to talk to them every single week and to ask them ‘how are you?

“He never deviated from that and it was a powerful way to show the guys this is the family or unit.”

“On All Ireland final day, he made sure that 36 men wore their jersey to have their photograph taken.

Ms Currid, who is herself an All-Ireland winner, said that in achieving high performance, teams in business and sport should identify a purpose.

Coaches are not babysitters and the leaders in the team were held accountable to make sure that no stone was left unturned.

“We also spent a lot of time on the vulnerabilities – helping these young men to talk about what was really going on and how to understand what challenges they had together as a group.”

The squad were turning to each other for support instead of from outside the group.

“When you go out onto a pitch the size of Croke Park or the Gaelic Grounds, you need them all aligned and fighting for each other,” she explained. 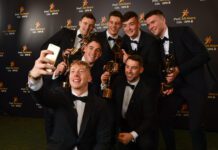 Who makes the cut? Pick your 2021 All-Star Hurling Team