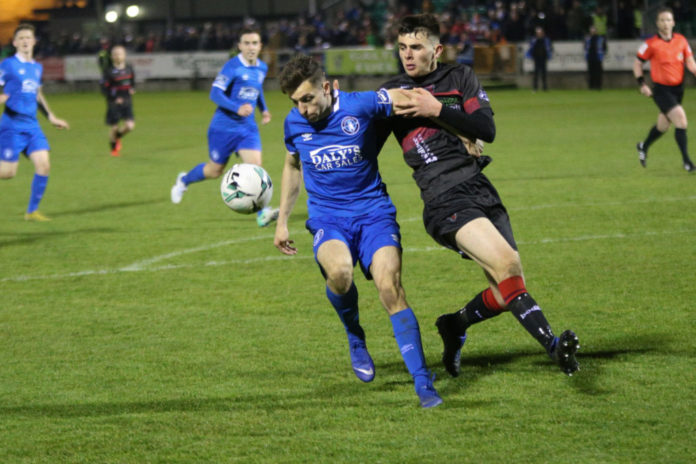 Limerick FC will play a host of top sides in the Airtricity League First Division in the coming weeks as their encouraging start to the season will be put to the test.

Limerick travel to Tolka Park on Friday night to play Shelbourne (7.45). The Shannonsiders enter the game off the back of a 1-1 draw with Wexford FC at the Markets Field last weekend.

Tommy Barrett’s men showed great character to equalise immediately through Darren Murphy having fallen behind to an Emmett Nugent strike. Afterwards, Barrett revealed that the players were disappointed with the result but he didn’t share their disappointment.

“The lads are disappointed tonight but I’m not disappointed. I feel they have done really well so far so there is no point in throwing the toys out of the pram.

“As long as you picking up points and staying close to the top, that’s the main thing. The time to be top is at the very end.”

Limerick begin a busy schedule against four sides who are all expecting to be in the promotion race this season. The Super Blues face trips to Shelbourne, Longford and Drogheda as well as a home game against Bray.

Barrett says there is a long way to go and it is very difficult to call but expects the top sides to take control soon.

“It’s a very close league. We have to be realistic about where we are at. If we can keep it tight and pick up points you never know. There is a long way to go. I feel all teams still look cagey.

“I think you will find it will level out after 10 to 15 games. You might have a surprise team in there but the top four with the more experienced players and bigger budgets will be up there and hopefully an outsider like ourselves can break into that.”

Limerick are currently two points clear of Shelbourne in the league in third place. Ian Morris’ Shelbourne side were expected to perform better than their league position suggests but the former Bohemians man has an array of quality at his disposal.

All four players are seasoned campaigners and it is expected that it will soon click for the Drumcondra side which is dangerous for their visitors.

In their three away fixtures, Barrett’s men have picked up two wins and a defeat to Bray Wanderers and will be expecting to provide stiff opposition for the Dubliners.

With an experienced back four along with solid performances from Jack Brady and Killian Brouder, Limerick will be hoping to keep concessions to a minimum which will provide an opportunity.

Connor Ellis’ work rate up front has been phenomenal in recent weeks and the former Cork man will give centre backs Byrne and Prendergast an uneasy night.

Shelbourne boast a midfield which includes the aforementioned Ryan Brennan along with his namesake and former Bohemians player Oscar.

It will be a big night for Darren Murphy and Jason Hughes who may not possess a bundle of technical ability but have been more than a match for their opposition since the beginning of the season.

Limerick’s record at Tolka Park has been quite good in recent years. In 2016, the Super Blues won 4-3 and 1-1 at the Dublin venue.

Famously in 2008, Limerick prevented a Dermot Keely managed Shelbourne from gaining promotion to the premier division as former player Colin Scanlon struck an injury time equaliser to hand the title to Dundalk.

Current Limerick manager Tommy Barrett played a key role in that Limerick side. A similar result on Friday night would continue Limerick’s unbeaten run which currently stands at five games.