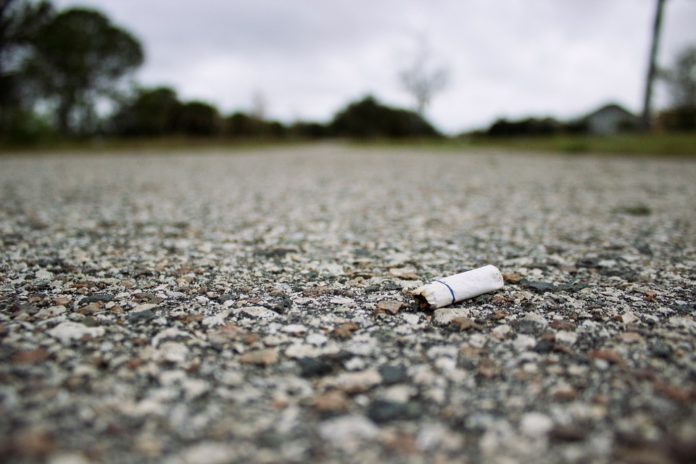 DISCARDED cigarette butts account for almost half the littering on the streets of Limerick city and county, a meeting of the Environment committee of the local authority learned this week.

He told them that smoking-related litter, discarded butts, matches, lighters and packaging account for almost 54 per cent of all the litter found on the streets.

Packaging and food-related litter were second and third on the list of offending items found thrown away, while dog fouling and dumped domestic waste are also a huge problem, he said.

Cllr John Gilligan (Ind) said that the issue of owners not picking up after their dogs has to be tackled, but he allowed that it is a difficult issue.

“Some of the owners are more vicious than their dogs if you try to approach them about not cleaning up,” he said.

Cllr Kieran O’Hanlon (FF) said it was particularly disgusting for parents with buggies, and people using wheelchairs and the council needed to concentrate its efforts on areas where people are inclined to walk their dogs.

Mr McGuigan said that pedestrians and motorists are responsible for 44 per cent of litter while retail outlets are the cause of another 44 per cent.

“The plan is to work on awareness, education, cleaning and enforcement,” he said.

Council workers collect 28 tonnes of litter a week from bins on the street.

Cllr Marian Hurley (FG) asked if the council was looking at “other European models to deal with dog fouling”.

Cllr Malachy McCreesh (SF) asked if the amount of packaging in litter is related to fly-tipping?

“I think it is the biggest source of litter in the city and county. Enforcement doesn’t seem to be working. People feel there will be nothing done against them”.

Cllr O’Hanlon said that the day of using May Eve bonfires as an excuse to clean out the back yard is gone and he asked that people would not leave rubbish on green areas”.

Cllr Gilligan said the May Eve bonfires “were a lovely tradition which has died and it was killed by dirty people, which makes me very sad”.

Cllr Elaine Secas (Lab) said that another focus should be on education. Children are really good at getting the message and spreading it. If we get the kids on board that is a great advantage”.