LIMERICK City and County Council has been called on to introduce a zero-tolerance policy with wandering horses throughout the city.

Labour Party councillor Joe Leddin believes no seriousness is given to the problem of roaming horses.

“This issue of horses roaming around various parts of the city and grazing openly on open space green areas surely belongs to a different era. As councillors, we have consistently raised this issue at various meetings for many years and yet the situation of wandering horses is now worse than ever,” Cllr Leddin told the Limerick Post.

“There is obviously no seriousness given to this problem, however the day will sadly arrive when a young child will be seriously or fatally injured by an apparent unowned horse which will lead to a public outcry.”

The City West representative went on to say that the local authority have been asked “time and time again” to avail of the services of a local company that can seize horses and impound them until such time as proper paperwork or license is produced.

“Using a company based in Cork has just not worked sufficiently to deter the owners of these animals from leaving them loose to graze and wander within housing estates.

“Talk about establishing workshops or identifying suitable sites for stables for those who wish to own and care for horses has failed to materialise. Green areas and sporting pitches continue on a weekly basis to be damaged by uncontrolled horses while no apparent action is being taken by the council to deal with this issue.

He said that many of these animals are malnourished and in need of proper veterinary care.

“Apart from the obvious dangers the horses present especially for young innocent children it is cruel to witness horses suffering from poor health. Only last year members of the Gardaí where injured when their patrol car came upon horses loose on the motorway.

“The council is spending over €500,000 per year which is a complete waste of public money and time if we do not start to use local companies who have the facilities to seize and impound these animals before a serious incident occurs.

“Enough is enough and it is time for meaningful action,” he declared. 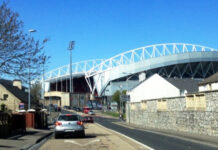