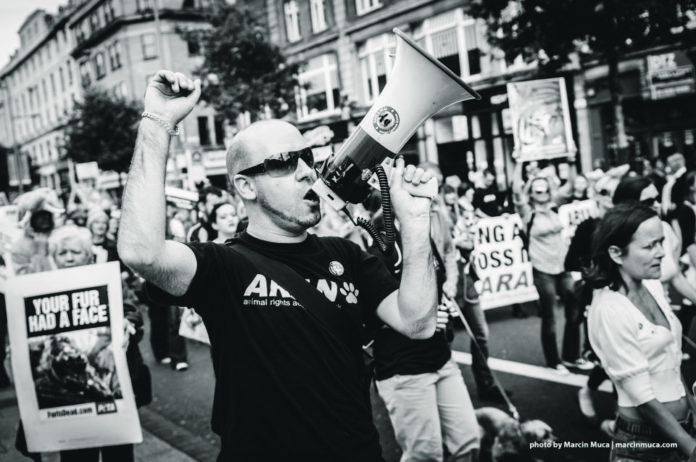 LIMERICK-based animal rights activist John Carmody has called for the Irish government to pass legislation that will ban fur farming across the country.

Carmody made the call this week after Italian fashion house Prada pledged to keep fur out of its collection. John, who once jumped onto the catwalk during a Prada fashion show in Milan with a sign that read ‘Fur Scum’, is using this week’s victory to up the pressure on the government.

“It’s time for Ireland to follow the UK’s lead and shut down fur farming before we find ourselves on the wrong side of history, the lone holdout still shamefully championing horrific cruelty to animals.”

The outspoken Limerick man has over the past two decades encouraged people to give up their furs and donate them to be used in educational awareness events.

He also worked tirelessly to help more than a dozen Irish towns and cities to pass motions to ban animal-act circuses using public land and pushed for animal abuse offenders to be given tougher jail sentences and stiffer fines.

“In Ireland’s fur industry, some 200,000 minks are imprisoned every year in squalid cages and are denied the opportunity to engage in natural types of behaviour, such as roaming, swimming, and caring for their young. Animals killed for their fur experience painful deaths by gassing, neck-breaking, suffocation, poisoning, and genital electrocution. They’re sometimes still alive and struggling when workers hang them up by the legs or tail to skin them,” he claimed.

PETA – whose motto reads, in part, that “animals are not ours to wear” – notes that many countries, including the UK, Austria, and Switzerland, have outlawed fur farming. In addition to Prada, the majority of today’s top fashion designers and brands – including Vivienne Westwood, Versace, Gucci, Stella McCartney, Chanel, and Burberry – have policies against using fur in their collections.