Limerick senior hurling manager John Kiely has made one alteration to the team that beat Waterford last time out for Sunday’s game against Clare at the LIT Gaelic Grounds.

Diarmaid Byrnes comes back into the starting lineup after he was left out for the 20-point win at Walsh Park and Dan Morrissey misses out.

Elsewhere, Kiely has kept faith with the rest of the team from the victory for a must win clash with The Banner.

Seamus Flanagan also returns to the bench after missing the Waterford game due to injury but Barry Murphy is ruled out.

Clare have also made just one alteration to their starting lineup, with Conor Cleary preferred to David Fitzgerald at left half back.

The post WATCH: John Kiely makes one change for Sunday’s do or die match with Clare appeared first on Sporting Limerick. 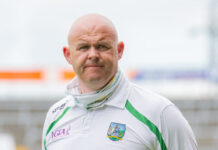