SHANNON Foynes Port Company is pursuing an unprecedented investment programme at pace to transform the Shannon Estuary into a major economic hub and act as an economic counter-pole to Dublin, consistent with Government’s National Planning Framework.

The port authority, which is responsible for all commercial navigation of the estuary, has a €64 million investment programme already underway that will add an additional two-thirds capacity at its general cargo terminals of Limerick and Foynes.

A new road will transform accessibility to the West Limerick town while an ambitious plan for Limerick Docklands could see up to €100m of investment in growing capacity there and maximising non-core assets such as disused buildings and unused lands.

The Shannon Foynes Port Company (SFPC) is already Ireland’s second largest port operation, handling trade valued at €8.5 billion per annum. It is also designated as a Core Network Port (TEN-T) by the European Union – essentially the EU determining that SFPC is not just of national but international importance, a status that strengthens its hand when it comes to investment confidence.

The transformational programme was launched in 2013 through Vision 2041, an ambitious plan aimed at maximising the enormous potential of the Shannon Estuary as an economic hub for the region.

Fast-track six years and SFPC has met and exceeded the targets in the plan, from the level of investment planned to the anticipated volumes handled by the company.

The plan is predicated on the huge opportunity that water depths on the estuary present, depths unequalled at any other Irish port and among the deepest in Europe. And with the size of vessels getting bigger by the year, Shannon Foynes Port Company is primed to take advantage like few other ports.

And, according to SFPC chief executive Pat Keating, the opportunity is redoubled by the need to rebalance the national economy.

“The reality today is that 83 per cent of unitized trade is going through the greater Dublin area (GDA) which accounts for roughly 45 per cent of GDP meaning that a lot of trade from the regions is also transiting the congested GDA.

“Consequently, this regional trade could be handled elsewhere which would have the twofold beneficial effect of enhancing national supply chain efficiency and simultaneously alleviating some of the GDA traffic congestion,” he explained.

“Brexit has underlined the need for sufficient land adjacent to the port and Shannon Foynes has 1,200 hectares zoned for port activity and can certainly facilitate more non-UK traffic.

“On top of that, we have the new road from the motorway at Limerick direct to Foynes port on the way so the pieces are falling into place.

“Our job is to make sure we maximise this great opportunity, an opportunity not just for Shannon Foynes Port Company but for the region and also for the country as a whole, given the need to rebalance the national economy,” Mr Keating declared. 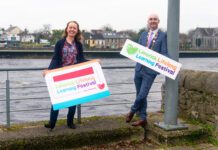