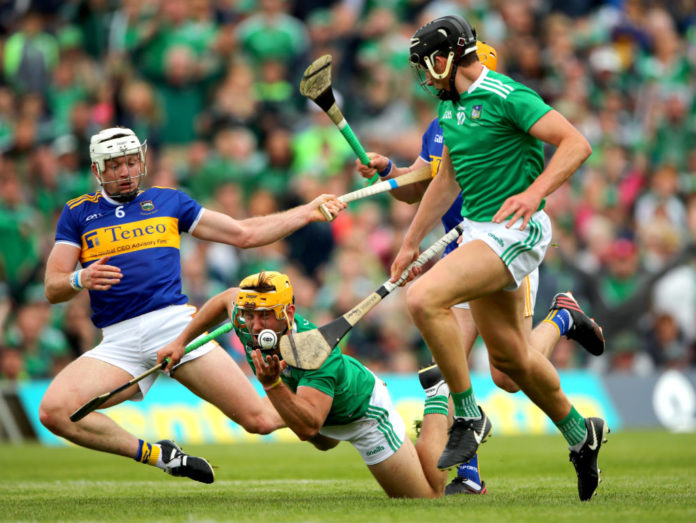 Limerick claimed their first Munster title win since 2013 and booked their place in the All Ireland semi final courtesy of a 2-26 to 2-14 win over Tipperary at the Gaelic Grounds on Sunday afternoon.

The opening eight minutes were played with a frenetic intensity that saw seven points onto board, 3 for the home side and 5 for Tipperary.

A Noel McGrath free opened the scoring for Tipperary but Gearoid Hegarty levelled inside 60 seconds.

John ‘Bubbles’ O’Dwyer put Tipperary in front for a second time but again Limerick came back with an excellent Kyle Hayes point.

Peter Casey then put Limerick in front for the first time but this time it was Tipperary that hit back to level through Dan McCormack.

A sublime Ronan Maher long range point gave Tipperary the lead once more before a Jason Forde free made it 5 points to 3 in favour it Tipperary.

The visitors definitely starting the sharper of the two sides as Limerick struggled to get to the early pace of the game.

Cian Lynch settled nerves with a well taken point to reduce the arrears to one on the 1/4 hour mark.

Paud O’Dwyer gave a baffling decision to award a free to Tipperary and Jason Forde extended the gap to two once more.

Tipperary then caught Limerick napping as a quick free found Seamus Callanan in space. Callanan buried the ball past Nickie Quaid quick free and goal. Limerick asleep but again a questionable decision from the referee. Limerick just not at the races.

Gillane then had a great goal opportunity for Limerick but his effort blasted over the bar when in truth a green flag should have been raised.

Peter Casey added another point as Limerick slowly worked their way into the game. Paud O’Dwyer was starting to irk the home crowd with some less than consistent decisions.

Aaron Gillane (free) and Seamus Callanan swapped points but Tipperary were would have been the happier of the two sides as the were able to largely frustrate Limerick’s efforts.

Limerick needed a spark and it came through an Aaron Gillane as he turned and beat his marker. Bearing down on goal, the Patrickswell forward found Peter Casey with a lobbed pass. Casey pulled on the ball first time and found the back of the net.

Draw game 1-7 apiece and Limerick finally starting to settle. Jason Forde point edged Tipp in front again but a Gillane free cancelled it out as Tom Morrissey was fouled going through on goal.

Ronan Maher responded for Tipp but again Limerick drew level. Tom Morrissey and Diarmaid Byrnes added the last two scores of the half as Limerick went in with a 1-11 to 1-09 lead at the break.

Diarmaid Brynes drew first blood for Limerick with a long range free to register the first score of the second half and extend the lead to 3.

Hayes and Hegarty combined as the St Patricks man casually knocked over from half way. 1-13 to 1-09 and John Kiely’s side definitely with the momentum coming out of the dressing room.

Kyle Hayes had a guilt edged goal chance but Brian Hogan was equal to the task. The danger cleared and Paude O’Dwyer awarded another soft free up the other end for Tipperary with Jason Forde accepting the gift.

In their next attack Tipp found John McGrath in space but not after a blatant push in the back of Sean Finn created the gap in the Limerick defence. McGrath was through on goal and made not mistake. Draw game again Tipperary 2-10, Limerick 1-13.

Peter Casey (2) and an Aaron Gillane (free) then settle nerves once again as Limerick extended the sanded lead to three. Jason Forde made it 2-11 for Tipp with a good point as Paude O’Dwyer again saw fit to award another questionable free to the visitors.

Graeme Mulcahy and Tom Morrissey then popped up with hugely important scores as once again the momentum swung back in Limerick’s favour.

Jake Morris pulled a score back for Tipperary who now trailed by 2-12 to 1-18 after 54 minutes.

Limerick were on top but the scoreline was not reflective of their dominance on the day. That all changed in the 56th minute as Peter Casey refused to give up on a lost ball to knock the ball away from James Barry.

The flick found Kyle Hayes in space with a clear run through on goal. The Kildimo-Pallaskenry made no mistake to make it 2-18 to 2-12.

Tipperary had a glorious chance in the next attack but Seamus Callanan’s effort was blocked by Nickie Quaid at point blank range. The save sucked the life out of Tipperary but reinvigorated the home side who rattled off the next three scores from Lynch, Casey and Hegarty to make it 2-21 to 2-12.

Tom Morrissey (2), Kyle Hayes, Barry Nash and Graeme Mulcahy put the icing on the cake to give Limerick a 2-26 to 2-14 victory and their first Munster title in six years.