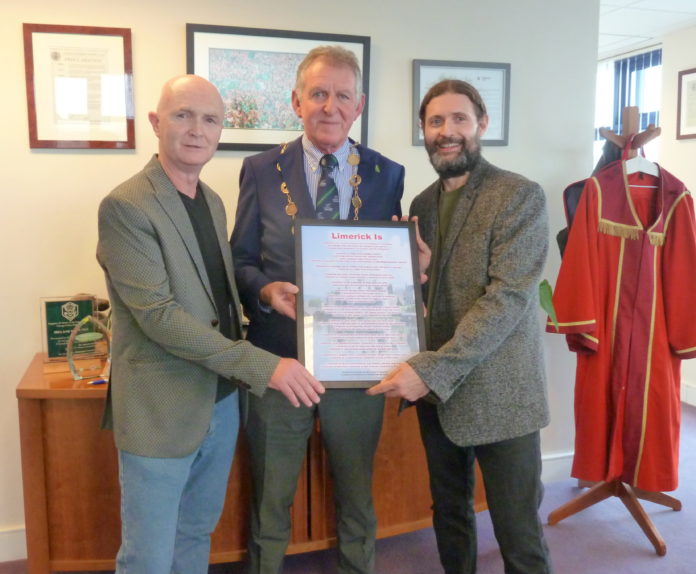 A POEM written by Limerick people and made up of words, phrases and lines submitted during the Limerick Writers’ Centre’s recent poetry festival ‘April is Poetry Month in Limerick 2019’, was this week unveiled.

The poem called ‘Limerick Is’ was presented to Mayor of Limerick, Cllr Michael Sheahan at a ceremony in City Hall by John W. Sexton, an tOllamh (Poet Laureate) for Limerick during the festival, along with members of the Limerick Writers’ Centre. After the presentation of the framed poem Sexton recited it to those present.

John W Sexton compiled the full length poem from over 10 A4 pages of submissions received during April this year. Sexton admitted that it was much harder to compile than he first imagined but was at pains to point out that every word in the poem was written by the people of Limerick. 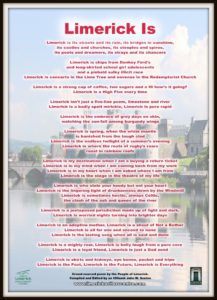 As well as gracing the wall of the mayor’s office the poem has also been turned into a postcard, with the help of Limerick City and County Council’s tourism unit, and 5000 postcards will now be distributed to hotels and tourist spots in the region, where visitors can pick them up free of charge and use to send greetings from Limerick all over the world.

The project is the brainchild of the Limerick Writers’ Centre, a voluntary not for profit organisation, dedicated to promoting the literary and artistic heritage of Limerick.

Speaking at the unveiling Mr Oran Ryan from the centre, said that  there were over 1000 words, lines and phrases sent in covering every  aspect of Limerick from the Treaty of Limerick to Ronan O’Gara and everything in between.

Some were funny, some vulgar others were just images or childhood memories. He congratulated poet John W. Sexton on his fantastic achievement of compiling the poem into a coordinated whole that is both poetic and makes sense. He went on to say that “there was something very moving about a poem written by so many people, as Limerick City is made up of so many voices with so many stories to tell, the poem reflects that diversity all within one memorable poem.”

In response, Mayor Sheahan said it was “a brilliant and original idea and something he had not seen anywhere before.”  He praised the Limerick Writers’ Centre for their continuing contribution to the cultural life of the city, especially their literary activities and wished them success in securing funding for their nonstop good work in the future.