The history of The Miami Showband is overshadowed by events in 1975. This new show tips the balance back to celebrating their legacy as hitmakers and entertainers.
Written by Marie Jones and Martin Lynch (The team that brought you Dancing Shoes – The George Best Story) The Miami Showband Story based on Ireland’s legendary showband got rave reviews when it opened in Belfast this August.

The Miami Showband were the most popular group in Ireland, north and south, in the 1960’s and early 70’s. The band released 40 singles and had seven Number One chart hits.
Classic hit records ‘From the Candy Store on the Corner to the Chapel on the Hill’, ‘Simple Simon Says’ and ‘Clap Your Hands, Stomp Your Feet’ are among those big selling seven inch records.

As a live band they caused Beatlemania style devotion from their fans wherever they toured. And they would play all over the country playing four, five shows a week. They brought joy and rock ‘n’ roll uniting every county and creed, they were greeted as superstars when they rolled into town.

On July 31, 1975, when the band was returning south from a gig in in Banbridge, County Down three members of the band were murdered and a further two injured by UVF paramilitaries (Ulster Volunteer Force) who had dressed in British Army uniforms at a bogus checkpoint. 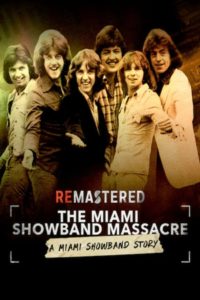 As research, your writer watched The Miami Showband Massacre (available on Netflix) which goes deep into investigating why it happened and who facilitated the attack and if British intelligence colluded with the attackers and the later unsuccessful attempts to frame the showband as terrorists transporting explosives.

The Miami Showband was made up of a mix of Catholics and Protestants. Bass player, Steve Travers stated in the documentary that the band didn’t even know their bandmates’ religious backgrounds.

This new show isn’t a musical version of the documentary!
The show celebrates the joyous dancehall days of the 1960’s with Dickie Rock as lead singer. The show recreates the live energy of the second incarnation of The Miami Showband with songwriter and frontman Fran O’Toole which brought the band into the glam era early 1970’s and it marks the tragedy in 1975 that has overshadowed the band.
The musical touches on the tragedy but is very much a celebration of the band’s golden era states performer Niall McNamee.
“Its essentially a story about their whole life as a band. It is a brilliant night out. To show how devastating the massacre is you need to show what a great time they were having before that.” says Niall.
“It is basically two best friends and their journey, the joy they brought to everyone and it is a musical. You will leave it feeling like you have been at a huge gig.”

The story is told through two members of the band, Fran O’Toole and Des Lee. The early days of the band with Dickie Rock is celebrated and even the theatrical version of that Irish showbusiness legend is getting the star treatment.
“Even the fella playing Dickie in this show was mobbed after the show!” laughs Niall.

While the band dominated the Irish music scene, their hit records were not played on radio very much after 1975. Niall McNamee suggests that the songs reminded too many of the troubles.
“The Miami were huge. They were always touring. But I was wondering if they were that huge then why don’t we hear those songs today?
“Probably when the band were killed, people just stopped talking about it straight away.”

Niall talks further about the joy in the audience at this show that get to relive the great music and shows that made The Miami so popular in the first place.
“The story is about them growing up. It is funny with great characters. We play the music live and there is a controlled chaos on stage. The best actor in the theatre is the audience. You feel like you were back there.”

The producers Marie Jones and Martin Lynch know the total value of that time and know what it means to people suggests Niall.
“Bringing that back is very important. It feels like, we are doing a good thing!”