TAKING time out in First Lady Nancy Reagan’s office – while in bits with jet lag and nerves – Elaine Paige found herself overwhelmed by the invitation to sing  for President Ronald Reagan. The early hour of the engagement was preceded by travel. “It taught me a lesson,” the great chanteuse recalls ruefully.

Ever since for long-haul performances, she checks in three days in advance “so I can rest, eat, sleep and adjust physically to the time difference.

“Performing for the President of the United States… that was a tricky moment!!”

It is an insight to Elaine’s extreme commitment to her art and audience. This is a woman who has 22 solo albums to her credit, four of them multi Platinum sellers and nine are Gold. Every releveant accolade and award going, she has been nominated or won outright.

Elaine Paige returns to University Concert Hall on Sunday September 29 as part of her concert tour  under the banner ‘The Soundtrack of My Life.’

Her previous gig here was a warm and revealing performance; she has a way of being immediate with the audience and the confidence to tell things as they are. The sharing is brief but spot-on.

Such is the trail she has blazed in musical theatre, such as ‘Evita’ (winning the Olivier  Award for Best Actress), ‘Cats’ and even her turn in ‘Dick Whittington’ winning her the Best Female Baddie and the show itself The Olivier Award for Best Entertainment & Family, we lose sight of her as a television actress, radio presenter – weekly audience of 2.5million – and producer.

For now, she returns to singing. “I have put a new show together, performing it here in the UK, all over, New Zealand and Ireland. Basically, I take a look at my favourite composers. It’s about the lyrics and how underrated lyricists are.”

Having done so many collaborations, shows and albums over the years, she has met or knows many of them personally: Randy Newman, Paul Simon, Burt Bacharach, Jimmy Webb.

“Their music has been the soundtrack to all my life and all [the programme] are famous songs written in the late ’60s and ’70s, interspersed with a number of theatre songs.”

Special mention to Paul Simon whom she has met, and loves his ‘50 Ways to Leave Your Lover’ – “a wonderfully clever song”; ‘One Fine Day’ by Carol King “who is a great songwriter. Her music influenced me” and another hero of hers, Jim Webb and his ‘If Walls Could Speak’. Fans of musical theatre will be overjoyed at Elaine’s back catalogue, with music from ‘Chess’, ‘Cats’, ‘Sunset Boulevard’.

From her own ‘Piaf’ show, which drew another Olivier nomination for Best Actress, there will be ‘Je ne Regrette Rien’.

She speaks of always having enjoyed theatre acting, and is certainly cutting it at television level, with parts in ‘Midsomer Murders’ and the well received comedy ‘Home from Home’.

Her latest role is as a medic in a BBC drama written by  the man who wrote ‘Doctor Foster’, Mike Bartlett.  Called ‘Life’, it is a six part series starring Alison Steadman, Peter Davison and Rachel Stirling.

This month, look forward to classics such as ‘Memories’ and the storylines that go with them, spun by this likeable diva and her adventurous life. 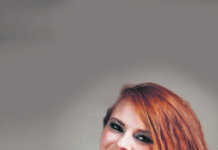 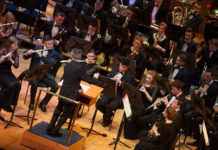 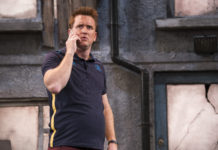 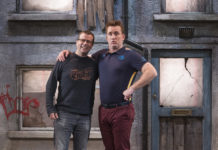 Helluva Postcard from the Ledge 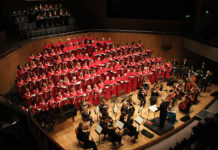