Home Lifestyle The firefighter chef keeps his cool in the kitchen

TWENTY-EIGHT years serving as a firefighter, Paul Knapp has spent his past 19 in Limerick, but it’s only in recent years that he has merged his love for fire, food and fitness to become ‘The Firefighting Chef’.

After leaving school at the age of 15, Paul had two ambitions. One was to travel and the other was to join the Fire Service.

“I could do neither at that time because my mum had my passport, she wouldn’t give it to me and the fire service wouldn’t look at you until you were 18”. 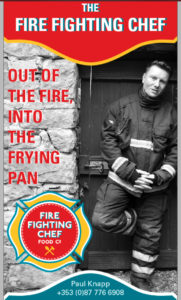 Because of that, he says he was lucky to have the chance to work in a kitchen for the three years before he finally went travelling after he turned 18.

However, the practical nature of kitchen work suited his learning style: “I’m the type of person that has to learn through life, I’d have to touch it and taste,” he explained.

While on his travels, he was exposed to different cultures and cuisines. Staying outside Barcelona, he was one of a group of 12 people “all different nationalities, all aged about 18 with our lives ahead of us”.

“We would have a budget of about £2 a day, and we’d chip in to buy cheese, wine, bread. There was a mish-mash of cultures and food, all put down on this table. We sat there and ate, and talked about what we wanted to do for the future. Food brought us all together, and food still brings people together.”

And he believes that the work in the kitchen and the fire service “mirror each other” in some ways.

“It’s all preparation and teamwork. The roles are both pressurised. In a restaurant, we have a prescribed menu, so we prepare for that. You have your starters, main courses, and your sweets so we have everything we need for our menu.”

“With the fire service, our menu can be anything and everything, so we are always preparing for anything that’s on the menu. If someone calls with something that’s not on our menu, we can take a piece of each thing and put them together to perform a test in an effective and safe manner”.

Listen to the full interview at www.limerickpost.ie/podcasts