CERVICAL check whistleblower Vicky Phelan has revealed that she had considered refusing an honorary doctorate from the University of Limerick because she understood that former Health Minister Mary Harney would have been the one to present it.

It was under Minister Harney’s regime that the cervical smear examinations were outsourced to a Texas lab which misread results, leaving women in the dark about the fact that their tests were abnormal.

In the event, the former Minister was unavailable on the date of the presentation.

The saga of the Limerick woman’s struggle with cancer and her fight for justice for herself and other women affected by the mistaken diagnoses are contained in the book which Vicky has published, ghostwritten by Naomi Linehan, ‘Overcoming’.

Ms Phelan will be in conversation with Rachael English at the Castletroy Park Hotel in Limerick on Sunday, September 29.

‘Overcoming’ outlines other red-letter days in Vicky’s life, including the day that her French boyfriend died in a car crash and she was left with horrific injuries, which she spent months recovering from.

It also touches on Vicky’s pregnancy with her daughter, Amelia, who was diagnosed in the womb with a condition which could have resulted in the baby being brain-damaged but thankfully, that didn’t happen, although Amelie has limited vision and other health issues.

Vicky also speaks frankly about having post-natal depression and about the treatment she underwent having been diagnosed with cervical cancer.

Commenting on the graphic nature of her description of the cancer treatment she said; “If this sends women to get their smear checks done then that’s what I want. Women need to know this is what’s facing them if they have cervical cancer.”

Ms Phelan, who settled her case against the US laboratory but refused to sign a ‘gagging’ clause is credited with having led the campaign to out the shortcomings in the testing process.

The mother of two said in an interview that she decided to do the book so that readers would know the truth of cervical cancer and that her children would understand the stance she took and her decision to fight and speak out.

Currently being treated with the cancer drug, Pembro, Ms Phelan says she has already researched a back-up plan if the drug ceases to work for her.

Initially, she used part of the €2/5 million court award against the US lab to fund her treatment but she also led a campaign which resulted in the Department of Health funding the treatment for other women with cervical cancer.

Tickets for the Limerick event are €20 and include one pre-signed copy of the book. 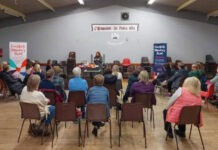