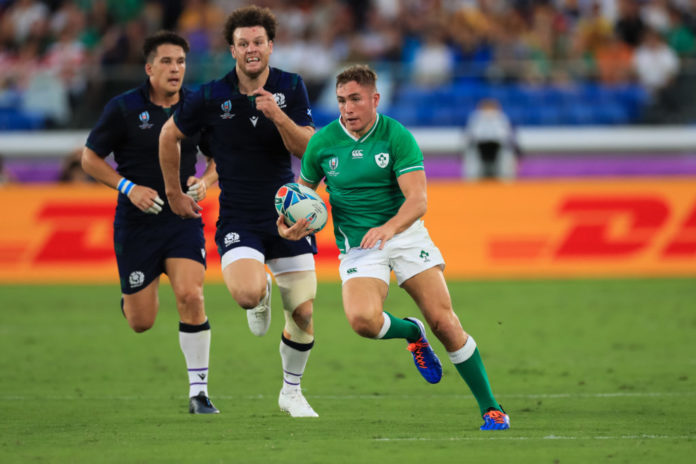 From an Irish perspective, Rugby World Cup 2019 is officially here.

An expected and nervy first 5 minutes from both sides, Ireland started the better with some excellent line speed and defence. Ireland pretty much controlled the first half, made very few mistakes and kept Scotland’s playmakers of Stuart Hogg and Finn Russell to a minimum.

Ireland’s Jordan Lamour did well at fullback, ran with the ball in hand and was comfortable under the high ball when tested.

Over on ITV’s coverage, former Ireland Captain Paul O’Connell pointed out the stat that 40% of tries come off the lineout, a percentage that increases in Ireland’s case.

This was proven after 15 minutes when Rory Best dotted down following a rolling maul off an Ireland lineout. Speaking of which Ireland’s lineout’s where excellent, keeping a 100% overall.

Defensively, Ireland were brilliant. The Irish line speed was quick and players like Bundee Aki and Jacob Stockdale tacked hard, putting huge on Scotland when they had ball in hand.

At scrum-time, Ireland’s pack were dominant, Tagdh Furlong scored off a five-metre scrum, and Ireland just had all their ducks in a row when it came to the basics.

Conor Murray was Ireland’s standout player in the first half. Murray had great communication, passing and ability to bring players around him into the game. This was a first-half performance reminiscent of the Garryowen’s man’s 2018 year in a green jersey.

As for Scotland, they never really got going and took a huge body blow of their own when they lost Hamish Watson to injury approaching halftime.

The second-half began with rain, something expected by many at the start of the week. A change Scotland likely fancied the least having to chase a game like they needed to.

The weather made things tricky for both side in the opening exchanges of the second half, but Ireland struck gold once again when a ball spilt after a Conor Murray kick, allowing Andrew Conway to pick up and score Ireland fourth try and with that, a bonus point.

Also worth noting was the fact that the dynamic scrum-half took over the kicking duties from Sexton briefly towards the end of the first half.

At 55 minutes in and 21 points up, the duo of Sexton & Murray were taken off and replaced by McGrath and Carty who took over the game well.

Ireland continued their dominance and found space with relative ease, there were absolutely no signs of the dour lineout performance displayed against England during the warm-ups. Ireland won all 11 of their lineouts and Rory Best threw straight darts all-day.

Ireland deflated the Scots for a finish. This was a performance we all hoped for the second the draw was made. Ireland put in a performance that consisted of getting their basics right and being dominant at the set-piece, lineout and scrum. Ireland beat Scotland in all the key areas.

15″ Ireland’s second try comes from a lineout, followed by a rolling maul that leads to Rory Best dotting down. Conversion missed by Sexton. (12-0)

The post Ireland earn Bonus Point victory we all hoped for against the Scots appeared first on Sporting Limerick.