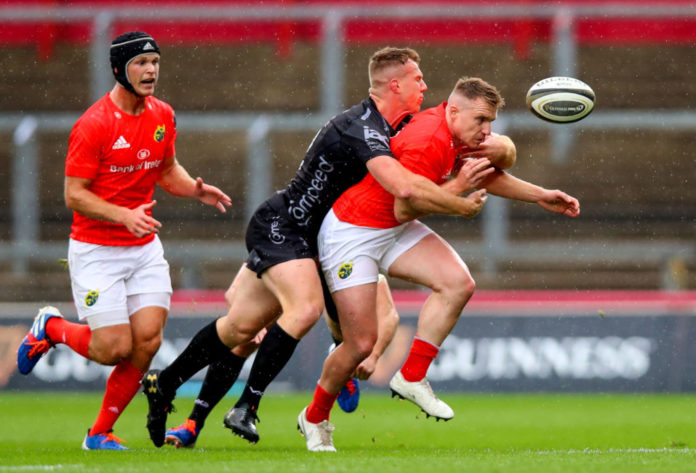 Munster got their Pro14 campaign off to the best possible start with a 39-9 victory over the Dragons at Thomond Park.

Johann van Graan’s men crossed for five tries in an impressive performance with 12 players away at the World Cup.

Arno Botha, Jack O’Donoghue, Shane Daly, Tyler Bleyendaal and Diarmuid Barron were the try scorers, ,while JJ Hanrahan chipped in with 14 points from the kicking tee.

It was the away side that opened the scoring in the third minute when Sam Davies slotted a 44 metre penalty after Tommy O’Donnell was pinged for not rolling away from the tackle.

The Dragons were the dominant side in the opening quarter with a strong breeze at their back, but Munster’s defence held firm.

Munster eventually got into a rhythm after a Jack O’Donoghue break led to Kevin O’Byrne with possession inside the Dragons ’22.

O’Byrne’s offload didn’t go to a Munster player, but excellent work from Haley forced Ashton Hewitt into touch and a home lineout five metres out.

The pressure told on the Dragons from the lineout with several darts towards the line resulting in a Munster penalty.

JJ Hanrahan opted to kick to the corner and after several phases close to the Welsh side’s line, Arno Botha dived over for the try. Hanrahan added the extras to put Munster 7-3 ahead.

That seemed to settle Johann van Graan’s men as they put their opponents under more pressure in the following minutes.

Excellent work at the breakdown by Jack O’Donoghue forced another penalty and Hanrahan kicked to the corner for an attacking lineout.

The Dragons were pinged again after a couple of phases and Hanrahan made no mistake from 15 metres to put Munster 10-3 ahead on the 25 minute mark.

A Mike Haley knock on gave the Dragons a scrum on the ’22 soon after the restart and then Stephen Archer was pinged. Davies made no mistake from the penalty to cut Munster’s lead to four.

The Welsh side then had Richard Hibbard sin binned for a shoulder tackle on Jack O’Donoghue.

An excellent Nick McCarthy delayed pass put Botha through after the lineout. Botha then offloaded to O’Byrne.

The hooker held onto possession and with a penalty advantage coming, O’Donoghue managed to somehow ground the ball for Munster’s second try that Hanrahan converted to put them into a 17-6 advantage.

That lead was soon at 16 points. A scrum penalty on halfway gave Munster territory in the Dragons ’22.

The ball eventually came to Shane Daly on the left. He showed incredible skill to spot some space in behind and chip over the defence.

The Ireland 7s star then collected to land Munster’s third try. Davies soon responded with a penalty that left the score at 22-9 in Munster’s favour at the break.

Munster were soon on the scoreboard in the second half with a Hanrahan penalty that stretched the lead to 19 points.

The Dragons then had a spell of territory and possession after Mike Haley was sin binned for a shoulder tackle, but the home defence held firm to not concede with the full back off the pitch.

The bonus point came right on the hour. O’Byrne was involved twice off a lineout. Firstly he put Scannell through a gap with a flat pass and was then on hand to offload to Tyler Bleyendaal to score the fourth try.

Hanrahan added the simple conversion to put Munster into a 32-7 lead and secure victory on the first day of the Pro14 season.