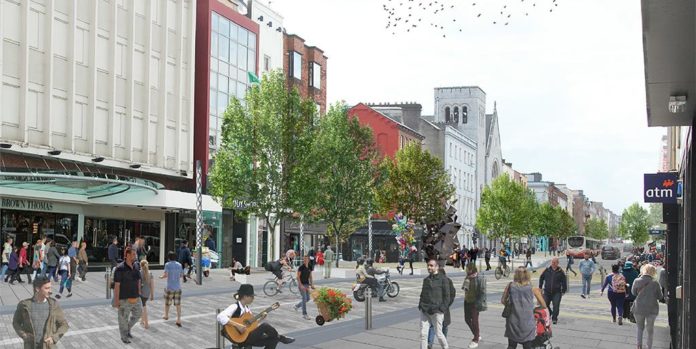 AT A meeting of the Metropolitan District Council, public representatives voted in favour of plans for the revitalisation of Limerick’s main thoroughfare.

Councillors vote 15 to 3 in favour of #OConnellStreetRevitalisation plans subject to inclusion of one segregated cycle lane and a 15km speed limit.

The approved plans include a shared space between Denmark Street and Roches Street of O’Connell Street and will also provide street furniture, including seating areas, trees, planting, bicycle stands, lighting, and features such as sculptures.

Councillors voted 15 votes to three in favour of the proposal with Fianna Fáil Councillors James Collins, Abul Kalam Azad Talukder, and Jerry O’Dea being the three councillors to vote against the proposal.

Green Party Councillor, Sean Hartigan, had a proposed amendment to the plans defeated which would have seen part of O’Connell Street between William Street and Cecil Street Pedestrianised.