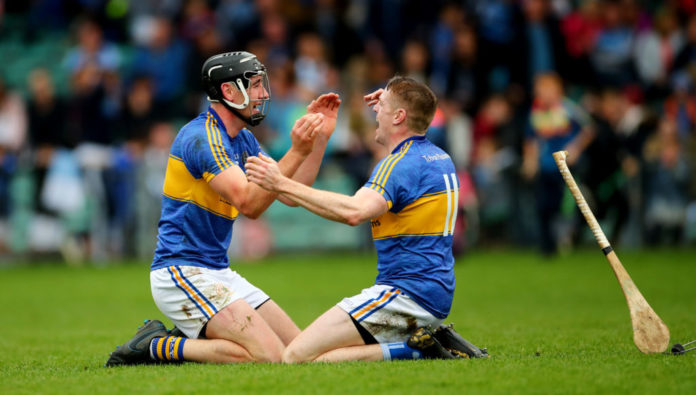 This Sunday Patrickswell chase a place in the Munster Championship final
when they take on current champions Ballygunner in Walsh Park.

“Massive match. Yeah looking forward to it now. It’s been a nice old campaign for us so far in Limerick and it was nice to get a win with the club. They’re an experienced club, what have they won? Five or six (six) in a row in Waterford? Serious club team.

It’s a massive challenge, especially travelling to Waterford as well. Lads have been involved in set-ups, counties, they know the routine of travelling in buses and stopping for pre-match meals and whatever, but it will be new to a lot of lads. It’s another challenge and I’m seriously looking forward to it.”

It’s almost a month since Patrickswell defeated Na Piarsaigh in the
county final which was a memorable occasion for Byrnes, atoning for the loss suffered
to the Caherdavin side in the decider in 2015.

“It was brilliant. We were there in 2015, we lost by a point, went back the following year and won it in 2016. So with this current team, we’re kind of there or thereabouts every year – semi-final, pushing for a final spot for the last five or six years. We’ve a nice group of lads there, and we’ve a good bunch of minors coming through there so it’s good for the club.”

This is Patrickswell’s first trip to the Munster championship since 2016 when they were last crowned champions of Limerick.

Three years ago they were defeated by Glen Rovers in the Gaelic Grounds,
a game which Patrickswell will have rued missed chances.

This Sunday supplies the players with another chance to make an
impression on the provincial championship.

“Absolutely. It’s hard enough to get there in the first place, coming through your respective county, whatever side you’re coming from. So whether it be Glen Rovers or, I know they’re playing the Tipp champions, whoever it may be, you want to go out and leave a mark on Munster and make a bit of history, for yourself individually, as a group of players and most importantly for the club.

So look, we want to put our stamp on Munster, and we’ve a massive challenge on Sunday so we’re looking forward to it.”

The Patrickswell team is managed by local legend and Byrnes was glowing
in his praise of the former Limerick stalwart.

“He’s a gas man in the dressing room and a gas man around the place. Always level-headed, always cool. But on a one-to-one basis, he’s brilliant for the players. He knows everyone individually, he knows their strengths, their weaknesses, working with players, trying to get the best out of them. He knows that as well.”

Although Byrnes says the squad as a whole is full of quality, Byrnes praised the performance of captain and Former Hurler of the Year Cian Lynch who shone in the County final, notching 0-3 from play.

“He has been super this year. I’ve seen him put on some great shows in the green jersey and the blue and yellow jersey for Patrickswell, I’ve played alongside him since I was U10, U12 the whole way up along. We’d just stand back and watch his flicks or whatever he’s doing, it’s brilliant.

But I’d say in an overall performance it was probably his best 60 minutes of hurling in no matter what jersey he’s playing, the last day in the Gaelic Grounds in the county final. The role kind of suits him, as captain. He’s been brilliant for us to be honest.

Even speaking in the huddle and stuff like that, he knows what will hit the nail on the head. If someone’s not carrying their weight he knows how to deal with it, he wouldn’t be one for effing and blinding and getting you going, but he knows how to get the boat rolling.”

Patrickswell take on Ballygunner this Sunday in Walsh Park in the Munster Club championship semi-final at 1.30pm.

The post Diarmaid Byrnes looking “leave a mark on Munster” ahead of Ballygunner test appeared first on Sporting Limerick.