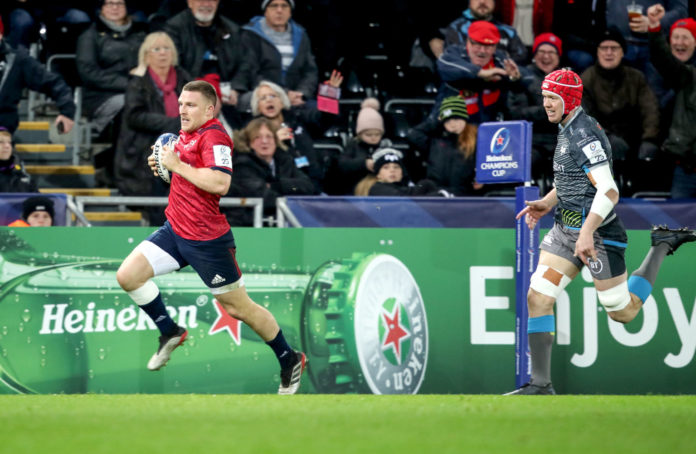 Munster left it late but made an impressive start to their Champions Cup campaign with a superb 32-13 bonus point win on the road in Wales.

It was a less than inspiring opening ten minutes from Munster as they failed to get any significant possession or territory. When CJ Stander got isolated on an 8th minute carry, It gave Luke Price a change to open the scores and he did just that with a well struck penalty.

The first real sign of intent came in 10th minute when a wonderful backline move had Earls in the clear. Mike Haley’s pass wasn’t on the money and Earls knocked on trying to claim the ball off his laces.

Munster would enjoy a better spell of possession and when Ospreys were caught offside, Bleyendaal had a simple kick to make it 3-3. A Munster Garryowen saw Dirksen claim the kick only for Earls to make the tackle and Stander to force the penalty for not releasing.

Two high tackles in the space of as many minutes gave Price a chance to equalise which he did. 6-6 and overall, a below par opening 29 minutes for Munster.

One thing Munster had started doing was putting their opponents through a lot of defensive sets and tackles. With some nice interplay and offloads inside the Ospreys’ 22 Jeremy Loughman finally burrowed over for the opening try. Bleyendaal knocked over an easy conversion to make it 13-6.

The prediction that Ospreys simply couldn’t keep their defensive rate going rang through in the opening 13 minutes of the section half as Munster put the game to bed with two fine tries in the 50th and 52nd minutes.

First up, a superb trick move off the front of a line out saw Tommy O’Donnell make break deep inside Ospreys territory. A couple of phases later and Murray spun the ball wide left to Haley. With a two on one overlap the former Sale player put Keith Earls in at the corner. 18-6 as Bleyendaal was off target with the extras.

Two minutes later and a tackle on an Ospreys player in the midfield forced the ball loose. Loughman picked it up, passed to Farrell who found Andrew Conway on the outside. The winger showed searing pace to outrun the Ospreys cover and sprint 70 metres for the try.

Bleyendaal made it 25-6 with the conversion. The only remaining question was if they could get that precious bonus point on the road. Ospreys however respond with a decent spell Aled Davies crossed in the 78th minute for their first try of the game.

79 minutes, 25-13 and Munster would get one last chance deep inside Ospreys territory for a shot at the bonus point but a line out infringement meant the chance came to nothing. Any logical person would think the bonus point gone with it.

However Ospreys were pushing for a losing bonus point and were penalised for holding on. It gave Munster a foothold in Ospreys territory and following another penalty, the line out maul came into play.