IRELAND’s first female steeplejack has completed her “last climb” at the age of 76, by abseiling out of a window 100 ft high, at Thomond Park, the home of Munster Rugby, to raise funds for charities.

Angela Collins O’Mahony, from Kilkishen Co Clare, challenged the status quo of Ireland’s male-dominated indigenous industry in 1960s, and partnered with her husband John, to form Collins Steeplejacks, and was Ireland’s inaugural winner of the prestigious Veuve Cliquot Irish Business Woman of the Year.

“I was on the Gay Byrne show on the 10th of March 1968, and there wasn’t a woman to be seen on a building site. Now everybody is abseiling and throwing themselves out of planes, and women are doing all sorts, it’s fantastic to see,” she explained.

Today, taking in a view of the Clare Hills, from her towering position in Munster’s theatre of dreams, the grandmother recalled her highest ever climb in the early 1970s.

“I went up 680 feet in Ringsend, in Dublin, to the top of the (Poolbeg) chimney stacks. When that was built, steeplejacks were very popular because we saved having to scaffold up all around the structure. Imagine what it would have cost to hire out scaffolding and how long it would have taken to erect it up to the top,” she said.

“When they were building the stacks they left a ladder on the side of it and you walked up the sheer side of that, and there was no safety equipment or harnesses in those days, you just walked straight up to replace an aircraft warning light.”

“And all we did was take out a bulb and fit another one and walk down again and that would cost maybe a couple of thousand (pounds). Steeplejacks were everywhere, they worked in all the sugar companies in Carlow and Mallow and Limerick.”

With the wind in her hair the affectionately known “Steeple-Jill” from Clare, made her descent to the hallowed Thomond turf, and, the journey back on terra firma was “a beautiful feeling”.

“It’s my last climb, so I gave it everything. It was great, such freedom, it was exhilarating,” she quipped.

“But, the hardest thing for people is letting go for solid ground, to go on the rope and you get a bit of a shock for a minute, but once you are on the rope it’s great fun really.”

“For me after having climbed hundreds of feet, it was easy but I was encouraging others to let go of the rope and take a chance.”

Collins O’Mahony, who was joined on the charity abseil by daughters Susan, Martina, and Hilda, and grandchildren, Kate, Emma and Karen led 80 others in the charity abseil, with all funds raised going to the Limerick Redemptorist Christmas Hamper Appeal, as well as the Children’s Grief Centre, which helps children cope with the loss of a parent or siblings through death or separation.

Having received a “substantial donation” from the Limerick Bon Secours (Barrington’s) Hospital, local solicitor firms, Gardaí, and staff at St John’s Hospital and University Hospital Limerick, they were “well on the way” to achieving their target of €20,000.

“The whole idea was to get old people involved,” said Collins O’Mahony, who was joined by 81-year old Josephine Murray from Ballinacurra Gardens, Limerick who was also “delighted” with her own abseil.

“People think that when you’re elderly that you don’t do anything except find your zimmer-frame, but we are actually a very knowledgeable people even though we are old, and we should be used more often with helping children with their homework or with teaching immigrants our language,” said Collins O’Mahony.

“The moment you retire you should go volunteering, otherwise your brain will die,” she added. 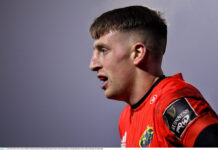