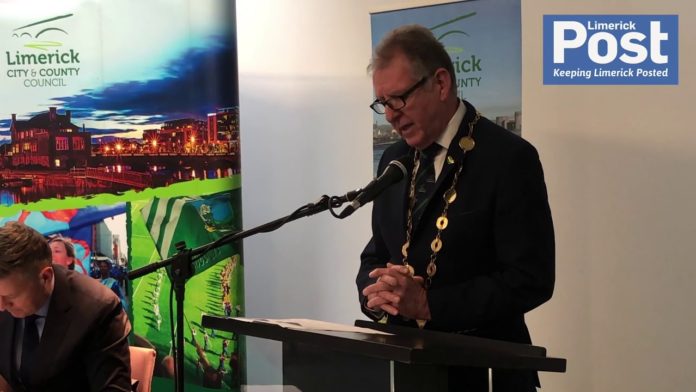 The Mayor of the City and County of Limerick, Michael Sheahan, and the Minister of State, John Paul Phelan TD, launched the Advisory Group to advise on the establishment of a directly elected Mayor for Limerick today.
The Mayor stated, “This is a hugely important opportunity for Limerick, which will have the first-ever directly elected Mayor in the State.  It is also a very significant reform in the way local government works in the City and County. Limerick will deliver on the people’s decision with the best possible outcome for Limerick”.
“The introduction of a directly elected Mayor is a further step in the immensely positive journey of growth and development that has taken place in Limerick in recent years, not least since the merger of the City and County Councils in 2014,” he added.
“The people of Limerick have said they want a directly elected Mayor with executive functions,” said Mayor Sheahan, adding, “It is important now that the elected Council and its executives, the business community, the voluntary sector and academia in Limerick help shape the new role of Mayor of Limerick to continue to be projected nationally and internationally as a dynamic, outward-looking place to live, work and do business.”
The Implementation Advisory Group will build on the Policy Document voted on in the Plebiscite and advise the Minister on how best to establish and shape the role of directly elected Mayor in Limerick.
The Group will examine the potential of the role into the future, and also the implications for the delivery of services and resourcing for Limerick City and County Council. It will consider the governance relationships between the new Mayor, the Council and the Executive and what possible extra functions the Mayor could take on. The Group will report to the Minister on these matters by summer 2020.
The Implementation Advisory Group will be chaired by Limerick man Mr Tim O’Connor, a career diplomat and former Secretary-General to the President. “Tim O’Connor has extensive experience of central government but also has a deep understanding of local government in Limerick, through the Limerick City of Culture project, Limerick 2030 and other local initiatives. He has gained important insights into Mayors internationally, particularly in the United States, which he will bring to the role of Chairman”, said the Minister.
Advertisement