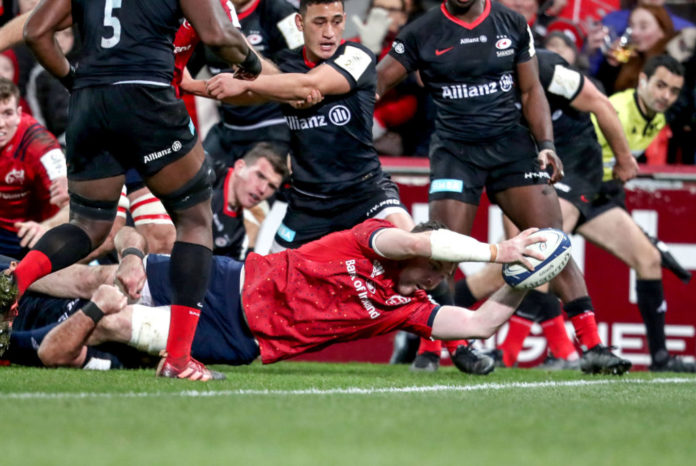 Munster earned their second win of this season’s Champions Cup after beating Saracens 10-3 at Thomond Park.

In a game that was blighted in the second half by horrendous weather conditions, it was Munster that earned bragging rights in the first of two back to back games between the sides.

All the points in the game came in the first half with captain Peter O’Mahony scoring the only try of the game.

JJ Hanrahan added a penalty and a conversion, while Saracens’ solitary score came from Ben Spencer in the first half.

It was Saracens that made the brighter start to the game after a Jackson Wray turnover in midfield, but Munster defended well and then made their first inroad into Sarries territory on 10 minutes.

Andrew Conway made a fine break on the right wing and passed inside to Rory Scannell. The inside centre was stopped 10 metres from the line.

Munster then went through the phases and edged ever closer to the line only for Stephen Archer to knock on.

Keith Earls was in lively form in the first half and it was a bit of his brilliance that nearly unlocked the away defence.

He followed his own chip over the top and helped force a penalty that JJ Hanrahan kicked to the corner.

CJ Stander went close to scoring after a couple of phases of play, but was held up. A penalty followed for Munster and Hanrahan made no mistake from close range to give his side the lead.

Munster then thought they had gone in for a try on 22 minutes. A superb effort by Conway helped set up Rory Scannell to score under the posts, but play was brought back for a Chris Farrell knock on earlier in the move.

The try deadlock was then broken just after the half hour. Mike Haley and Hanrahan did well to keep the ball in play on the right wing before the ball was moved to the other side.

Earls cut in off the left wing only to be stopped short, but Peter O’Mahony dived over after Murray’s flat pass from the next phase. Hanrahan nailed the conversion to put Munster 10-0 ahead.

Some poor discipline then saw Saracens have a chance to immediately hit back, but Ben Spencer hit the post.

The Saracens scrum half was given another chance moments later and second time around he was on target to leave the score at 10-3 in Munster’s favour at the break.

Spencer had a chance to reduce Munster’s lead to four when the game resumed, but hit the post for a second time in the game.

Conditions worsened from that moment on with neither side able to hold onto the ball for any sustained period.

Neither side added to their score as the weather took control of the contest, but it’s Munster that earn the win, while Sarries travel home with the losing bonus point.

Arno Botha was sent off late one for a forearm but a late Sarries pen came to nothing after a superb Jack O’Donoghue lineout steal.