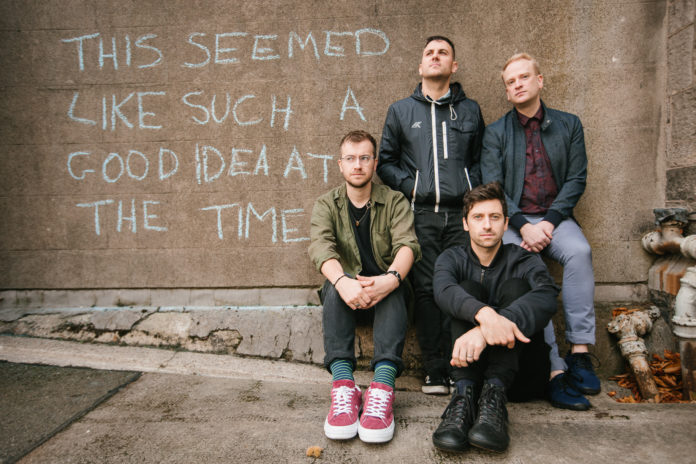 THE story of Irish indie favourites Delorentos has been one of worldwide touring, breakups, critical acclaim, record label collapse, recording sessions shelved, and a Choice Music Prize.
With all that history, it is hard to believe that their huge hit S.E.C.R.E.T. happened just ten years ago.
Limerick Post chatted to Kieran McGuinness, vocals/guitar about the song and the years of touring and that wonderful remix that launched the band in Spain.

The band have been touring the US and Germany in recent months with current album, True Surrender which is a lush and expansive musical experience where the band reflect on the changing times that the quartet are living through.

It has been a mad busy year for Delorentos, all four lads are married, babies have arrived and singer, guitarist Ro has moved to London. The band live in changing times.
“The album dealt with growing up. We have been living the truth of the album for the last year.”

Delorentos are not a band that will look backwards, but at this time it felt right to reflect back on the first two albums and the track that is still the song that closes out the live set.
This short tour strips back the extended lineup to just the four guys playing as they did in their early years.
“We are always a band that looks forward. We didn’t tour the 10 year anniversary of the debut so we are doing a look back now. We have never done something like this before.”
“It is just the four of us playing the early songs in the most stripped back fashion. It is going to be a different set list.”

The band will be playing songs they haven’t played in 10 years, three songs they have never played before and even a couple of new tracks they have been working on.
The track S.E.C.R.E.T. was a late inclusion to the band’s second album. It didn’t feature in the early demos but Rónan Yourell brought the song into the studio.
“It had a good beat and good melody,” remembers Kieran

Nobody knew then what a big song it would become for the band.
A band releases a good song and it is the listeners and fans who connect with it and turn it into an anthem.

The song got a remix from Spanish electronic band The Leadings which became the most played track from Delorentos in Spain where they play regularly. Kieran remembers hearing that remix on a hot summer night in Spain.
“That was one of the most surprising things that ever happened! If someone played a song by us on radio in Spain – it ended up being that one.”
“We were playing a festival in Spain and we arrived the night before and went for a drink in the town.
“We went down to the local bar, the street was closed off for the festival. The remix was blasting out of the speakers and loads of people who had no idea who we were danced away to that song.”

Delorentos have released six albums and are not too concerned about what social media or streaming service fans use to get their music. Kieran simply says they prefer to, “stay in a room, write the best songs we can and put them out wherever anybody wants them.”

Getting radio play on Ireland’s main stations has been problematic.
“Radio in Ireland has got so constricted. its gone very old-school, dictated almost entirely by the mainstream. Click on all the radio stations and they are playing the exact same song.
“This thing of having to make everybody happy all the time! – That is the wrong thing.
“The right thing is to play the best music you can and people will come to you because they trust you to get music out there.”
Kieran, an avid music fan, is loving two of our favourite bands at the moment.
“Two bands I actually love – PowPig and WhenYoung.  (both Limerick bands)
“They are not getting played on mainstream radio.
“They are played in the places where I pay attention which is, alternative radio or online.”
Kieran cites blogs Nialler9 and The Last Mixed Tape, online station 8Radio and those organising The Choice Music Prize as places that stand behind great Irish  music.
“They stick their neck out and play great music.”