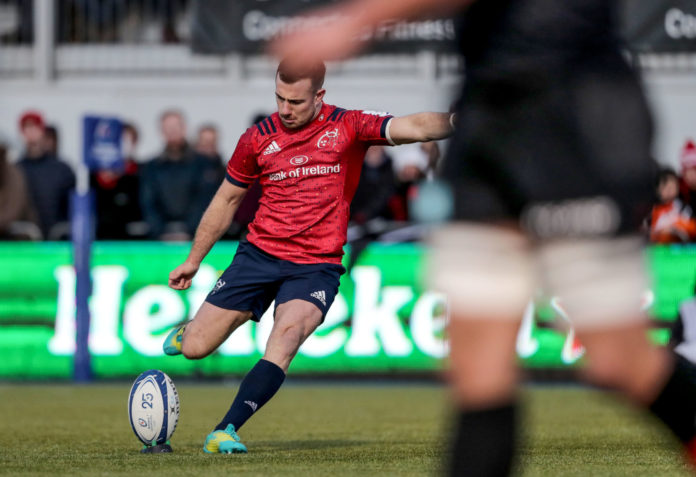 Johann van Graan’s side went down fighting but a lopsided penalty count and some poor decision making ultimately made the difference as Saracens recorded deserved a 15-6 victory.

Munster endured a torrid pre game as captain Peter O’Mahony was withdrawn with an injury meaning Jack O’Donoghue got the call to the starting XV.

The opening score of the game came when Mike Haley’s indecision gave Saracens their first decent attacking platform with an attacking five metre line out.

Saracens secured the maul and forced the penalty. Farrell converted to make it 3-0 after 8 minutes.

Three minutes later and Munster would have to reach further down the depth chart as Tadgh Beirne left the field with what looked like a serious knee injury. O’Donnell was sprung from the bench.

Munster levelled on 25 minutes after a sustained spell of pressure on the Saracens line forced an offside penalty. Hanrahan made no mistake with a routine strike.

To compound their injury worries, John Ryan then left the field to be replaced by Stephen Archer.

Munster repelled several good Saracens attacks with Keith Earls intervening to dislodge the ball from Richard Wigglesworth with the ball on the Munster line.

Farrell would miss a kickable chance for Saracens and Elliot Daly then kicked a penalty dead when aiming for the corner. The half would end 3-3 in what was a fascinating arm wrestle.

Munster started the second half well and 4 minutes in, JJ Hanrahan made it 6-3 to the visitors with a fine strike after Keith Earls was hit late from a kick ahead.

With 30 minutes to go, Jamie George exchanged verbals with the Munster medic which caused a chain reaction that ultimately saw Owen Farrell penalised for running ten meters to join the melee. Hanrahan pulled his effort left and wide.

It was a huge missed opportunity for the visitors which seemed to revitalise the home side who would go onto dominate territory and possession for the next 15 minutes.

It culminated on 65 minutes following a series of penalties and a warning from French referee Pascal Gauzere. Under ferocious pressure, Billy Vunipola sprung from the base and despite the attention of three Munster defenders was able to find Sean Maitland in space to dot down for the opening try of the game on 66 minutes.

Crucially for Munster, Farrell pulled his conversion wide meaning it was just a two point game.

With ten minutes to go, Maitland was again crucial when his defensive effort a turnover from Keith Earls. Several phases later and deep inside Munster territory, Mako Vunipola crashed over from close range for their second try in 5 minutes.

The easy conversion made it 15-6 to Munster who were now outside bonus point range and struggling.

A late hit on Hanrahan saw Munster inexplicably turn down a three point shot at a losing bonus point to kick to the corner. The line out maul was snuffed out by Saracens and the chance was blown. It was really poor game management.

The game would finish 15-6 to the home side, no bonus point for Munster and European hopes now out of Munster’s own hands.