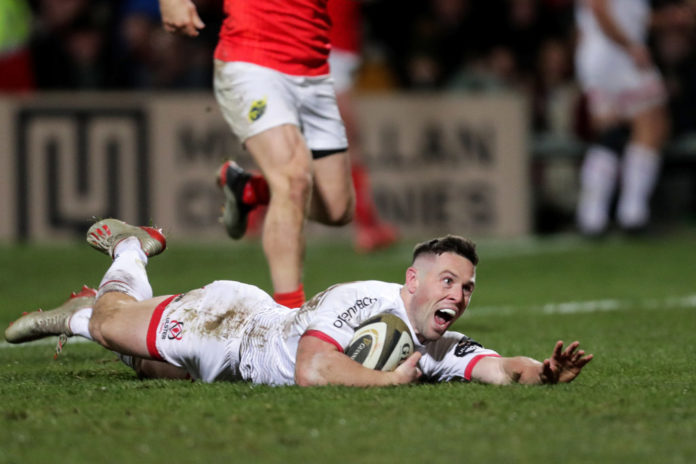 Munster suffered a heavy loss to their Irish rivals Ulster at the Kingspan Stadium this evening on a scoreline of 38-17 in the Guinness Pro 14.

Munster made the better start between the sides thanks to fullback Shane Daly, who showed his pace and composure to cross the whitewash. Munster Out-half Joey Carbery (who made his long-awaited first start in the competition) added the extras with the boot.

Scrum-half John Cooney got Ulster on the scoreboard with a 14th-minute penalty kick. The ‘Le Petit General’ bagged his sixth try in seven games when he tore apart the Munster defence to edge his side 8-7 ahead. Cooney kicked the conversion to go 10-7.

Ulster edged ahead even further when winger Robert Baloucoune scored in the right corner thanks to a massive carry from Iain Henderson. Cooney nailed the conversion between the posts to make it 17-7 as halftime approached.

Munster reduced their rivals lead to seven when Henderson was penalised at the breakdown. Carbery slotted the penalty and both sides headed towards the dressing rooms for halftime.

Munster were left stunned just three minutes into the second half after Matty Rea scored a fine team try off a smashing line of running, following excellent approach play from the home side. Cooney duly added the extras for 24-10.

Ulster continued their dominance after the break when Matt Rea smashed over the line just three minutes into the second half. Cooney’s conversion increased the home sides lead to 31-10.

Jacob Stockdale gathered a perfect intercept to race clear for Ulster’s fifth try. Cooney continued his brilliance to make it 38-10.

To their credit, a soundly beaten Munster sit managed to score their second try of the game off a well-executed maul, with hooker Niall Scannell dotting down in the 66th minute. Carbery’s conversion made it 38-17 to the home side.

Munster did respond thanks to a Niall Scannell try, while Carbery added to conversion to make it 38-17. But with just over 12 minutes of play to go, it was too little to late from Johann van Graan’s side in Belfast.

The loss in Belfast sees Johann van Graan’s side surrender top spot in Conference B of the Guinness Pro 14 following Scarlets victory over Cardiff Blues.