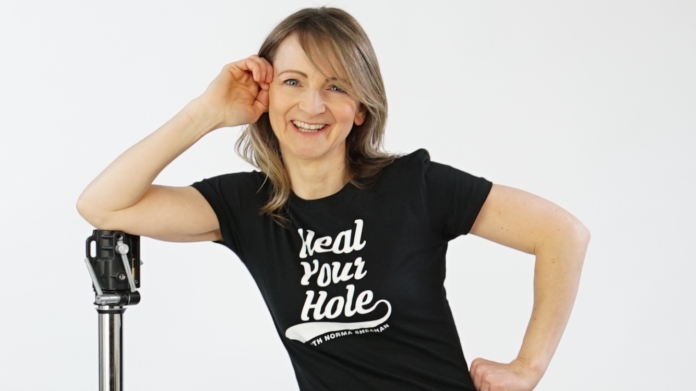 JANUARY, the time for reflection, promises and bucket lists is when actress and comedian Norma Sheahan is going to tour her debut stand up show ‘Heal your Hole’.

Talking to Limerick Post, Norma admitted that she finds the prospect of debuting her stand up as “absolutely daunting” but she loves a challenge and she loves to perform live to an audience.
“I must be sick.” laughs.

For the actress best known to us from Emmy Award winning ‘Mooneboy’, ‘Damo & Ivor’, ‘Finding Joy’ and ‘Bridget & Eamonn’ and soon featuring in new period drama ‘Dead Still’, creating and performing a stand up show was on her long term bucket list.

Performing in a musical was another long standing ambition – She was on stage in Limerick with ‘Angela’s Ashes The Musical’ and has great memories of her time here.
“We had a great night at The Savoy afterwards with Malachy McCourt as special guest.”

Prompted by her mother’s illness and passing in 2019, Norma has revived her bucket list and achieving her outstanding goals starts this month in Belltable. Her mother was Norma’s inspiration to try new things fearlessly and live life to the fullest.
“She has given me the bravery to try stuff.”
“I don’t think she’d be happy with the title of it.” laughs.

The title of the show fits in with this ‘New Year, New You’ bumpf that we hear everywhere in these weeks, but ‘Heal You Hole’ is actually inspired by Norma’s efforts in the celebrity version of ‘Ireland’s Fittest Family’, which she won!!
Rugby legend Donnacha O’Callaghan is the inspiration behind the title of the show.
“On ‘Celebrity Fittest Family’, he was my coach.”
“The very first challenge of the day, I had to jump off a container and I landed on my coccyx.
“He roars at me, “Get up off your hole and get on with it!”
‘It was my calling – I got up and did the climbing ramps and pulling trucks – so you can do anything after that!
“You do it because you know there is ten grand there for charity at the end of it.
“We didn’t expect to win, just do our best to not make a show out of ourselves.”

Norma and her family won the competition and earned €10,000 for cancer support services in Cork.

Her mother, who was very ill at the time, did get to celebrate with the family when the TV show was broadcast on New Year’s Eve 2018.
The family had to keep the outcome of the show under wraps until the transmission but Norma got to share that wonderful proud moment with her mum.
“We had to keep it quiet. The night it was aired on TV, we were down the local community centre in Cork. It was a few weeks before she passed away.
“It was quite emotional. We managed to get her down and get her a chair in the hall with everyone watching it. She just sat there quietly, her lungs were packing up at the time.”

‘Heal You Hole’ is a smart show talking about Norma’s experiences in life and with hilarious disaster stories about her less than perfect attempts at being a physiotherapist, nutritionist and a helpline volunteer.
For Norma, who chatters at a million miles an hour with her get-up-and-get-on-with-it drive, it was a bit of a challenge to be a silent and listening ear on her helpline number.
“I got let go because my approach and technique were not suitable even though they trained me up. I spent a lot of time in the role play.
“They noticed that I wasn’t really listening – I was just telling people how to fix their lives.
“I’m very much a ‘get to the point and stop beating around the bush’ person!”

So with ‘Heal Your Hole’ Norma makes no promises to find the answers to anybody’s problems – but we all know that laughter is the best medicine in January.
“It’s all comedy – I’m certainly not qualified – to heal anyone’s orifices in this tour.”
‘Heal You Hole’ is best described as a big hug for surviving Christmas and surviving the new year.

And Norma’s best advice for herself is as sound as anybody else’s words of wisdom.
“If you are feeling you have a big lard ass on you – just get up off your hole and start moving it.
“If you have fallen out with your family – shut your trap for a while.
“Instead of being a greedy pig – just get up off your hole and do some good for someone else.
“It’s all about hugs and healings and getting active.”

Norma Sheahan is at Belltable on January 17.www.limetreetheatre.ie for tickets