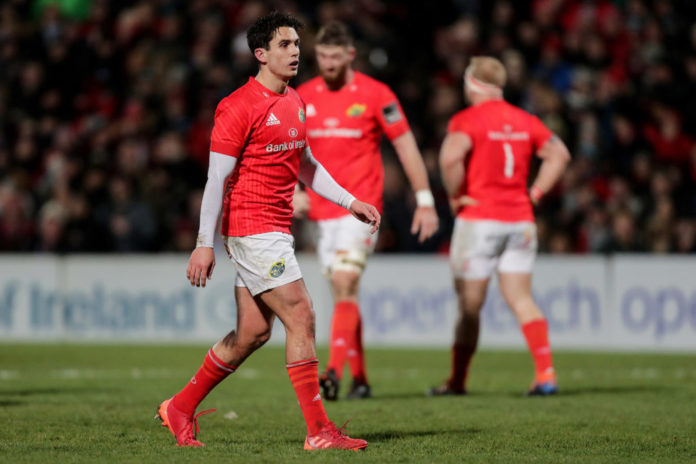 Munster will need to put together a winning formula over in Paris this weekend to have any chance of progressing into the Heineken Champions Cup Quarter Finals when they take on Racing 92 at the Paris la Défense Arena on Sunday.

The province suffered a humiliating 38-17 defeat to Ulster in the Guinness Pro 14 last weekend. While Hooker Niall Scannell added a second try to Munster’s tally in the second half, it just wasn’t enough to match the pace and power of their interprovincial rivals, as Ulster scored three converted tries in twenty minutes to claim all five points on offer in Belfast.

To make matters worse again, Munster have been left flattened by the news that Joey Carbery picked up a wrist injury that requires surgery in that Ulster loss and will be out long term.

Carbery made his first of the season against Ulster following an ankle injury that flared up again during Ireland’s World Cup campaign. The injury initially occurred in a World Cup warm up game against Italy at Lansdowne Road.

To add to a frustrating period for the province, Munster have recorded just two victories in seven games across all competitions and slip to second position in Conference B after Scarlets win over Cardiff Blues.

Speaking to the media after his side’s poor performance in Belfast, Munster Head Coach Johann van Graan quickly turned his attention to the Parisian club.

“Different competition, different challenge coming up against a team in Paris under the roof on a 4G pitch which is totally different to what we faced out there tonight.”

“Look, that’s Rugby. I’ll take the responsibility on my side, I’ll take it straight on the nose and move on.”

A number of Munster’s Irish internationals are set to be available for the clash including Chris Farrell, CJ Stander and Jean Kleyn, while duo Mike Haley and Billy Holland who were rested for last weekend’s defeat are set to return.

Meanwhile, Racing 92’s Simon Zebo could be a major doubt for a reunion with his old club on Sunday. The Cork man limped off just eight minutes into Racing 92’s 27-19 victory over Clermont at the weekend and watched from the sideline with an ice pack on his ankle.

Another Munster man in Paris is Donnacha Ryan who is expected to feature on Sunday having come off the bench over the weekend unscathed for Laurent Travers’s side.

While Johann van Graan and his newly formed coaching ticket of Stephen Larkham and Graeme Rowntree cannot look past Sunday’s all or nothing clash, a win is essential otherwise and early exit from the Champions Cup becomes a very real possibility.

While Munster have been through a tough number of games in recent weeks, history shows the clubs ability to perform on big European Cup days when it matters.

Should Munster come away with a win in Paris, their final pool game at home to Ospreys just one week later will become more significant as they search for their 19th quarterfinal in 25 years of European Cup competition.

The post Carbery loss leaves Munster with an even bigger mountain to climb appeared first on Sporting Limerick.