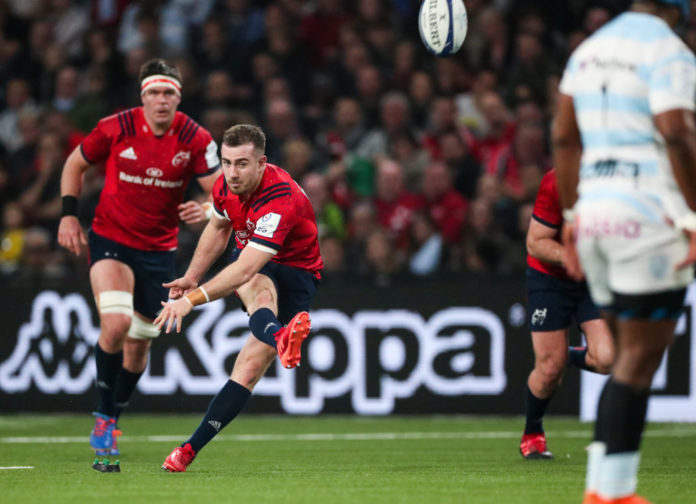 Racing 92 have beaten Munster at the La Defense Arena this afternoon by 39-22 in Paris, picking up a bonus point try with seconds left of the clock.

Racing made mistakes early on in the game to give Munster out-half JJ Hanrahan three penalties to put his side 9-0 ahead after the opening twenty minutes of play, where it was Munster who were in full control.

Racing scrum-half Teddy Iribaren split the posts to open Racing’s account soon after to get within six points.

A beautiful Teddy Iribaren 23 metre reverse sweeping pass found the hands of Teddy Thomas to get themselves on the scoreboard. Match referee Wayne Barnes went to his TMO to check for a potential Vakatawa knock-on however the try was deservedly awarded.

As halftime approached Munster pulled out their ‘get out of jail card’. Racing had the Munster defence stretched and they looked certain to score a try, however, Chavancy’s pass was intercepted by Andrew Conway, who then ran the length of the pitch to cross the whitewash and earn Munster their first try of the afternoon.

Hanrahan added the extras with the boot and the visitors took a five-point lead as both sides entered the break.

Just short of the hour mark, Racing took the lead by 20-19 thanks to the boot of Iribaren. Munster’s Jack O’Donoghue was penalised at the breakdown to give the penalty kick away in front of the posts.

Soon after, Jean Kleyn’s drive for the line came up short for the province. Murray then looked for Billy Holland, who knocked on the ball. With the try-scoring opportunity missed, Hanrahan pointed to the posts and kicked Munster back into a 22-20 lead.

But the French club came knocking on Munster’s door. A brilliant kick by Finn Russell found Teddy Thomas who did superbly to finish it off. Machenaud missed the conversion to leave three points between the pair down the stretch.

But that wasn’t the end for Munster’s misery. The Parisian club finished out the game in style by scoring a bonus point fourth try to send Munster home empty-handed through Juan Imhoff. Machenaud converted and Wayne Barnes blew the fulltime whistle.

The post Racing 92 prove too much for Munster in Paris appeared first on Sporting Limerick.