Home Sport Other Limerick Motorcyclist Andrew Murphy back on track as he looks forward to... 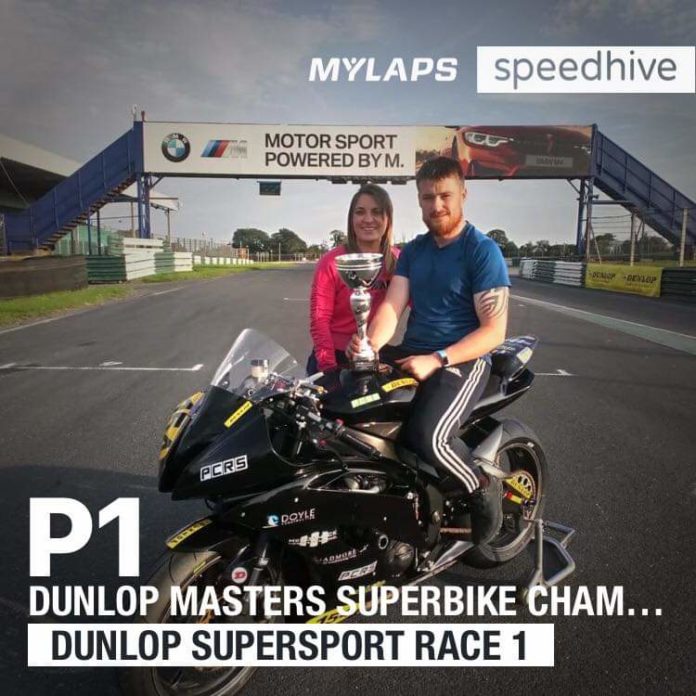 Andrew Murphy is a 27-year-old motorcyclist currently living in Abbeyfeale.

Murphy began motorcycle racing in 2013 and has been competed at Mondello Park for the past three years.

However, each of those meetings came at a different cost for the motorcycle enthusiast.

After winning the Superbike Cup Championship in his first year at the track in 2017, Murphy ran into difficulty twelve months later.

Murphy was involved in a fast motorcycle injury in 2018 but thankfully sustained no serious injuries. However, his bike was badly damaged with Murphy organising a fundraiser in order to repair the bike.

Unfortunatle Murphy missed a number of races as a result and did not finish on the podium that year.

Decding to undertake an apprenticeship as an electrician the following year, Murphy’s funds were slashed with the 2019 season in financial jeopardy before it even began.

Murphy and his crew rallied together and allowed him to start the Masters Superbike championship on his XX10 in April.

However, Murphy was involved in another incident that saw him thrown from his bike in the first race of the championship and once again his bike was damaged as he escaped injury.

As Andrew had very little earnings from the apprenticeship, the 2019 season seemed like it had come to a close almost immediately as he wouldn’t have the money for repairs.

Devastated, he packed up his gear and headed home where we visited the A&E department to treat his injury.

Yet, with the next round approaching, Murphy received a enormous donation from Philip Case of PCRS Bikesport, an Ohlins Ambassador who offered Andrew the loan of his R6 motorbike to compete in the Supersport Class.

Incredibly Murphy qualified second and secured third place in all three races; each on bike be had never ridden before.

Unsure about whether he would have the funds to keep racing the bike, Andrew received backing from his team which would help him scrape by in each round but every round held a shadow of doubt due to the financial pressure.

Not to be dissuaded, Murphy grabbed the bull by the horns in this class and started securing podium places, winning a shot of races over the few months.

Approaching the end of the season, on the second last race, there was only 15 points separating Andrew and the race leader despite the fact that he had missed 3 races equating to 75 valuable points.

Ultimately, Murphy would finish the 2019 season in second place on a massive high.

Rewindding only a couple of months back, this ending didn’t seem possible but Murphy put in a fight all season and brought incredible excitement and intensity to another class which made the 2019 season so interesting!

Finishing second place after missing the first three races of the Supersport class on a stock bike that he had never rode before is both an incredible personal and professional achievement.

Despite facing all those obstacles, Murphy’s skill and passion for racing shone true and allowed for a warranted outcome.

As we prepare for the 2020 season, the financial pressure remains as he goes on the hunt for a motorbike to race but there’s no doubt that Murphy will do his best to compete in each round this year.

We wish the best of luck to Murphy and all the participants at Mondello this year, hopeful that the Abbeyfeale man has a season uninterrupted by incident.

The post Limerick Motorcyclist Andrew Murphy back on track as he looks forward to 2020 appeared first on Sporting Limerick.