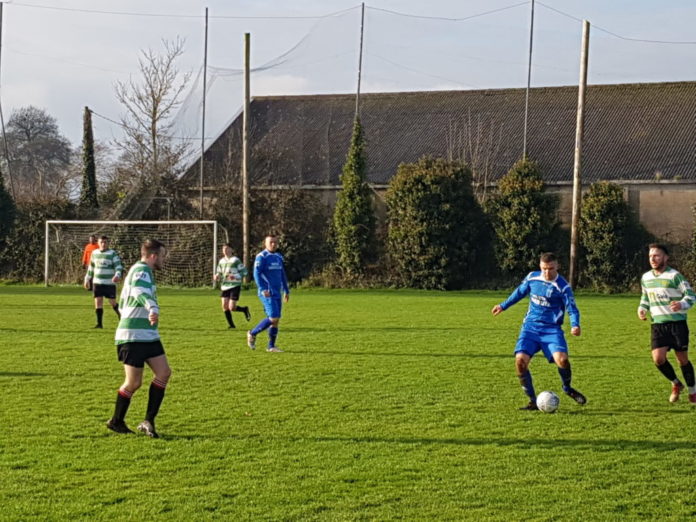 The attention will turn to the fourth round of the Munster Junior Cup this weekend when five Limerick sides look to make the most of home advantage over a two day period.

Although all eyes will be firmly fixed on the provincial trophy this weekend, there is a big Tuohy Cup semi-final taking place tonight between Ballynanty Rovers and Kilmallock at Jackman Park (7pm).

One of the above sides will be the first to make it to a final in the Limerick District League this season, with the Tuohy Cup being decided first every season. Kilmallock will see Thursday’s game as a big opportunity and a welcome distraction from league action.

Niall O’Riordan is now leading the side at present and the county outfit are currently just one point above the relegation zone at the halfway stage. They made it through to the final following a penalty shoot-out victory over Coonagh United at Jackman Park two weeks ago.

Kilmallock will need their influential attacking players including Barry Sheedy and Jack Barry to show their worth tonight and test the Ballynanty defence. Ballynanty possess pace in the attacking third which could cause centre backs Benni Burke and John Heffernan if both are selected once more.

On a big pitch on Carey’s Road, Connor Ellis has already caused destruction against both Mungret and Janesboro on their way to the final. Donal Magee’s men will be firm favourites for the tie and the Shannon native will be desperate to bring silverware to the northside outfit this season.

On Saturday evening, Aisling Annacotty take on Killarney Athletic in the Munster Junior Cup in Annacotty. Mike Aherne’s men enter the game off the back of two highly competitive cup fixtures. Firstly, they suffered penalty shoot-out heartbreak against Fairview Rangers in the Tuohy Cup quarter-final before edging out Premier A side Charleville in the third round of the Munster Junior Cup last week.

Annacotty have proven that the team can prolong their stay in cup competitions. You only have to look at last season’s run to the FAI Junior Cup semi-final for added evidence. The winners of this tie have a great chance in the next round as they will have home advantage against either Drinagh Rovers or College Corinthians, both of Cork.

Killarney Athletic will arrive in Limerick in buoyant mood as they defeated Kerry giants Tralee Dynamos 1-0 in the third round with Ian Prendergast grabbing the goal. They are currently in fifth place in the league but have played at least three games less than everyone else in the division. Killarney have won 2 and lost 1 thus far.

Regional United B will be looking to join their A side in the last 16 of the competition on Sunday afternoon when they host Cork outfit Macroom at Dooradoyle (2pm). Regional B are top of the Division 1B league and are currently unbeaten in the league.

Combine that resilience with a young and energetic side at present and you have a possibility of an even greater cup run for the side in the fourth tier of Limerick junior soccer. Just four years ago, Regional B embarked on a run to the quarter-final of the Munster Junior and were defeated by renowned Tipperary outfit St.Michaels.

Although, back in that season, the age profie was certainly different with the likes of experienced campaigners Shane O’Donoghue, Danny Galvin and Frank Browne lining out for the Dooradoyle ouffit. The B team have already surpassed expectations so anything else should be viewed as a bonus. The winners will face the toughest of matches, away to either St Mary’s of Cork or current holders St. Michaels.

Last season’s runners up Pike Rovers will be looking to go one better and win back a trophy that they have won for two of the last three seasons. The Hoops were beaten on penalties by St. Michaels last May but in truth, the Crosagalla outfit were lucky to get it to the lottery of penalties on the night.

Robbie Williams welcome Cork outfit Pearse Celtic to Crosagalla on Sunday afternoon (2pm). They will be strong favourites heading into the tie and have only lost one football match in 90 minutes since losing to Janesboro in April 2018. That game saw bitter rivals Fairview Rangers get the better of them in the Lawson Cup final which is an incredibly consistent run.

Considering those lengthy runs were achieved with a small squad and a relatively injury free season, Williams and O’Callaghan will be hoping that the quality and extra quantity available to them will be of added value on all fronts. If Pike can get through this tie, we could see an all Limerick last 16 class with Geraldines at Crosagalla.

Geraldines AFC have been regular contributors to the excitement of the Musnter Junior Cup over the last five seasons, reaching the final in 2014 under Paul O’Donnell, eventually succumbing to a 1-0 defeat to St. Michaels. Also, the Tipperary outfit were the thorn in Geraldines side once more in 2019 as they defeated a Derek Hannon managed team 0-1 on a very tight Markets Field pitch.

Geraldines face off against another Tipperary side in the form of Killavilla this coming Sunday. Derek Hannon recently lost the services of Kevin Barry to Janesboro and although he didn’t start in the recent league encounter with Fairview, Barry is certainly a physical and useful option in cup games.

Shane Byrne will now have to fill the role and the ‘Dines will be hoping that Cian Collins can re-kindle the form which made him so revered at Pike Rovers two seasons ago. Hannon will be hoping his side have gained experience following last year’s run with many of the same squad present.

Unfortunately for the Garryowen outfit, the game has come too quickly for injured pair Karl Turner and goalkeeper Evan Moloney, which means veteran John Ryan will continue to deputise.

High flying Fairview Rangers host Clonmel Town at the Fairgreen on Sunday afternoon as they look to continue their superb form both locally and nationally. Jason Purcell’s side are full of pace with front three Eddie Byrnes, Ross Mann and James Fitzgerald causing plenty of problems for every junior defence they have come up against this season.

Clonmel Town are currently third in the Tipperary Southern District League but if the Fairgreen outfit are at their best, they should advance to the last 16. Both clubs had a deep rivalry in the 1990’s and were competing for both Munster Junior and FAI Junior Cups on a regular basis. It has been a long time but the rivalry will be renewed on Sunday. The winners are due to face Stradbally or Tramore away from home.

There are also two Limerick Desmond League sides in action in the Munster Junior Cup on Sunday as Glin Rovers travel to Mayfield Park to face Doolans Cow (2pm). Abbeyfeale United were drawn at home to Carrigaline United (2pm).

The post All eyes on the Munster Junior Cup this Weekend appeared first on Sporting Limerick.