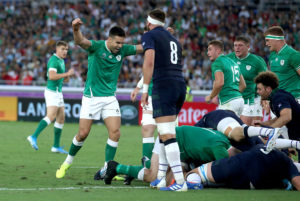 The Munster trio will be joined by Dave Kilcoyne and Peter O’Mahony, who have been named in the replacements. There is no place for Keith Earls in the matchday 23.

Leinster’s Caelan Doris is the only new cap to start the game. His provincial teammate Ronan Kelleher is named among the replacements.

The full matchday squad is below.

The post Three Munster players named in Irish side for Six Nations opener with Scotland appeared first on Sporting Limerick.