Home Rugby Ireland Leinster surplus in the back row could be just the ticket for... 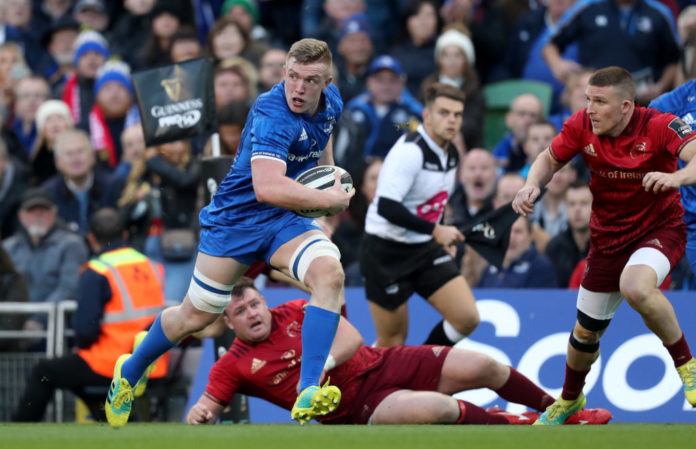 It’s a phrase that, to me, resonates with the challenges of managing a squad of professional rugby players in a competitive environment. You want to have depth, obviously – like a bank wants to have borrowers – but too much depth and you start to run into problems.

I was reminded of this phrase when I was compiling a depth chart for the Irish back row over the last few days in the aftermath of Dan Leavy’s positive injury news. They now have Jack Conan, Will Connors, Max Deegan Caelan Doris, Leavy, Josh Murphy, Scott Penny, Rhys Ruddock and Josh van der Flier for their three back row positions. This doesn’t include their current academy players or who they’ll be taking in this season.

You’d think that’s only a matter of time, though. If you’re involved with Leinster, you see the potential problem here. If it’s “the other provinces are going to be sniffing around these guys” then you’re right, but that’s only half the story.

The oldest player on this list – Rhys Ruddock – is currently their vice-captain and could easily have four seasons left in him at the top level. Dan Leavy, if he returns from injury properly, is a guy with Test Lion ability.

Josh van der Flier fits into the same bracket. Jack Conan is coming into his peak as a player and could easily start for Ireland against England if he was fit. It won’t be long until Caelan Doris is spoken about in the same bracket and I’d say Max Deegan is only a small bit behind him.

Leinster will, rightly, be saying to the guys further down the depth chart to those players that they’ll get a fair rake of minutes during the PRO14 and, with the game being what it is these days, you’ll get a fair bit of time if there are a few injuries with Will Connors being a great example.

If you’re Scott Penny, for example, you could probably buy a coach telling you that you might some Cat 3 PRO14 minutes next season behind Connors, Leavy or Van Der Flier and maybe a few rotation minutes in the Interpros. You’d back yourself to perform in those minutes too and maybe make the step up to key PRO14 games or Champions Cup games if you get a big string of luck with injury further up the depth chart.

But if you’re Scott Penny, your problem isn’t Josh Van Der Flier, Dan Leavy or Will Connors, it’s someone like Mark Hernan – the 6’2″ outgoing St. Michael’s captain from 2019 and current starting #7 for the Irish u20s – and whatever other top-end young athletes that are currently lurking in the

Essentially, the equation is like this; if Player X is good enough to potentially start Champions Cup level games but he’s behind three players in their mid-twenties in his preferred position (who are also currently in Irish contention and, obviously, good enough to start those games right now), how long can you reasonably keep Player X ticking along with the idea that he can reasonably expect to compete with relatively young players who might be on central contracts?

Leinster can be loyal to these players up to a point but, ultimately, if a 19-year-old young lad who looks like he could be the next Richie McCaw pops out of St. Michael’s next summer, he’ll get the James Ryan treatment and rightly so. Then Player X can look forward to a lot of A Rugby, trips to Newport in February and trying to look like, say, Hamish Watson in training when Leinster play Edinburgh in a knockout game.

David Nucifora is the devil incarnate to Leinster fans because he, to them, is the evil man who spirits away their players to other provinces but what you’re really seeing is the gift and curse of having a youth system as prolific as the Dublin private schools.

You will produce players – lots of them – and they’ll be good, too, but the reality of their only being so many minutes to go around in an environment where everyone wants to play for Ireland will bite sooner or later in one area of the team or another.

Nobody with designs of being a top player wants to be the guy who’s 29 years of age with 50 provincial caps, a handful of bench minutes in the Champions Cup, a few league medals you watched being won by other players from the stands, 0 test caps and having to endure looking at the Scott Penny of 2025 eating up his minutes in a contract year.

The post Leinster surplus in the back row could be just the ticket for all appeared first on Sporting Limerick.