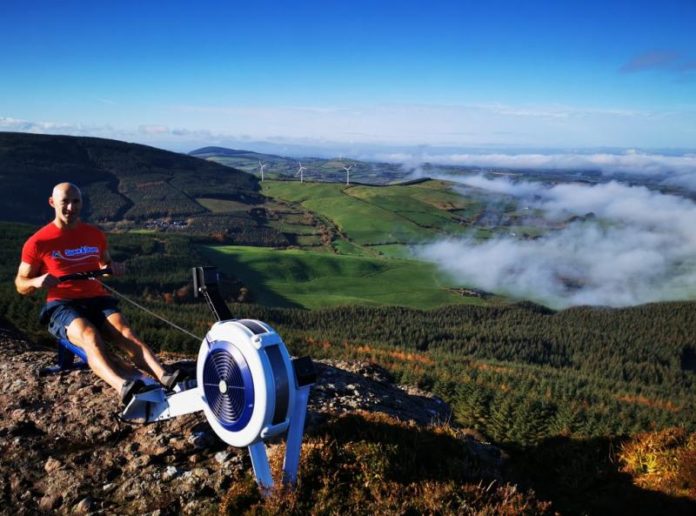 A LIMERICK Garda is planning to carry a rowing machine to the summit of Ireland’s tallest mountain where he will row a distance of ten kilometres to raise funds for children battling terminal and serious illnesses.

Ken McDonald from Ashbrook Gardens on the Ennis Road has set a €30,000 target for his “Carry up Carrauntoohill” fundraiser to cover the cost of repairs to the Share A Dream ‘Dreamland’ play area which was broken into a number of times last year.

The one of a kind fantasy play land on the Dublin Road allows for non-able bodied children to play with their able-bodied siblings and friends.

A champion rower and training instructor at the Garda Training College in Templemore, Garda McDonald told the Limerick Post that he was determined to help the Share a Dream Foundation after meeting its founder Shay Kinsella last year.

“To say I was blown away by the amazing work being done by the charity for seriously ill and disabled children all over Ireland for the last 27 years, would be an understatement.

“Not only do Share a Dream make dreams come true for children fighting terrible life threatening illnesses but they have also built the very first ever all- inclusive magical indoor Fun Centre called Dreamland.”

Garda McDonald said the charity relies solely on donations and the goodwill of the community and does not receive any government funding.

“So, when the charity suffered two major break-ins last year causing thousands of euros worth of damages, I decided I had to do something to raise much needed funds for repairs and to make dreams come true for terminally ill children while raising more national awareness that the charity deserves.”

“Rowing is my passion and I have been so fortunate in my career to have broken the World indoor record over 1000m last November at the Provincial rowing Championships; I won the Rhine marathon in Germany in a men’s coxed quad, and won two Gold medals at the World Masters rowing championships in Budapest.

“So, whatever I decided to do, it had to be associated with rowing. After witnessing the amazing courage and determination that the children endure daily to find some quality in life, I decided I would challenge myself to the limit for Share a Dream.”

He plans to carry out his ‘Carry up Carrauntoohill’ challenge on Saturday, March 28.

“I will be attempting to carry my rowing machine, which weighs 26kgs up Carrauntoohill and then row 10 kilometres before bringing it back down.

“My aim is to raise €30,000 rectify the damage caused by the break-ins and so that this wonderful organisation can continue making dreams come true for very sick children.”

He is now encouraging people to take part in raising funds by organising a sponsored cycle on a stationary bike or rowing machine; a sponsored head shave/beard shave.

“Or why not get out with the kids and go for a walk or a climb in your local area,” he suggests.

Online donations can be made at on iDonate or contact 061-200080 to get a sponsor pack.