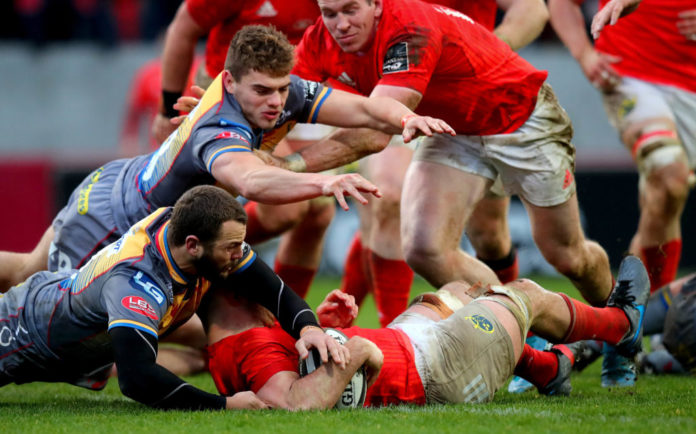 Munster made it four consecutive victories in all competitions with a narrow 29-10 victory over Scarlets at Thomond Park.

The win tightens their grip of a top two spot in Conference B of the Guinness Pro14, as the sides head for a break of three weeks before the final block of games this season.

Tries from Jack O’Sullivan, captain Billy Holland and a late brace from Gavin Coombes helped see off a gallant display from the Welsh outfit.

Storm Jorge had it’s say on the game, with high winds and intermittent rain tormenting the brazen spectators in attendance. It also made kicking, both from the tee and in open play, difficult.

Munster now open up a 8 point gap on their Welsh rivals, who played majority of the second half with 14 men, as well as ten minutes with just 13.

Dan Jones kicked the visitors in front on eight minutes, moments after full-back Angus O’Brien was wayward from 40 meters.

Sam Lousi received a straight red card for his involvement in an altercation with Chris Clote and Hanrahan on 33 minutes. Lousi attempted to punch out-half Hanrahan, leaving referee Mike Adamson with no option but to dismiss the lock.

Munster scored the opening try of the contest moments later when youngster O’Sullivan bundled his way over the whitewash. Hanrahan’s conversion meant it was 10-3 at the interval.

Holland ghosted into the corner in the 52nd minute, as Johann Van Graan’s side looked to pull clear.

But Javan Sebastian pulled the visitors back into the tie with a converted try, making it 15-10.

The response from Munster was to get a third try, with replacement Gavin Coombes going over moments after Tevita Ratuva was sin-binned for a dangerous tackle.

Munster tried to secure a bonus point try, late on. First Darren Sweetnam was denied in the corner by the narrowest of margins, before a rolling maul was held up in the final seconds.

Eventually, with the clock in the red, Coombes carried over the line for the crucial fourth try. 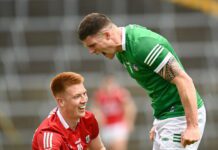