Home Sport Gaa POLL: What is the county’s favourite Limerick Hurling Game of the Century 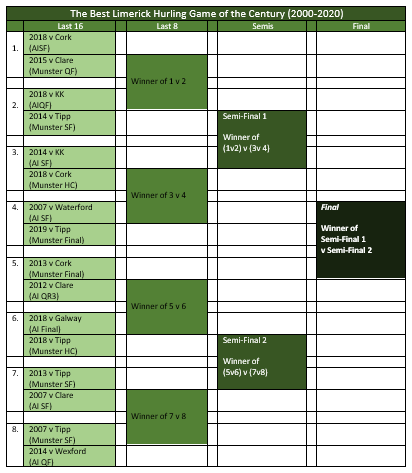 It is fair to say that this century has been topsy turvy for the Limerick Senior Hurling Team.

There have been some fallow periods with just one Munster Championship victory in the ten-year period between 2002-2012.

However, the 45-year All-Ireland drought was ended by John Kiely’s side in 2018.

Furthermore, there was a brace of Munster Championship Titles annexed as well as a National League triumph in 2019.

With so many memorable games seen by the Limerick faithful in the past twenty years, we asked the public to suggest their favourite games since the turn of the 21st century.

From the comprehensive list, that not only included wins but also losses and draws, we chose the top 16 and randomly assigned them into eight pairings.

Over the next eight days, the public will vote on each pairing as we choose the best Limerick hurling game of the 21st century with the polls to take place on our Instagram and Twitter channels! (@SportingLK)

Below is our Best Limerick Hurling Game of the Century Bracket.

The post POLL: What is the county’s favourite Limerick Hurling Game of the Century appeared first on Sporting Limerick.