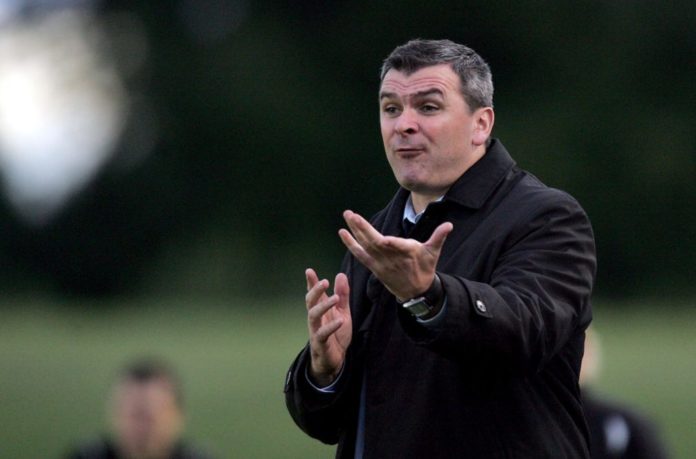 We continue to concentrate on providing our readers with different content to fill the void left by the lack of sport during these incredibly difficult times. As we are a Limerick based organisation, we will endeavour to concentrate on local soccer.

This week, we will aim to assess the managerial reign of five Limerick senior soccer managers over the past decade. Today, we begin with a man who presided over Limerick FC’s return to the Premier Division after a 19 year absence.

Pat Scully (2010-2012): The Dubliner took over the reins in Limerick in 2009 following the departure of Mike Kerley in the off-season. Scully arrived in Limerick just before the Pat O’Sullivan era began.

Inheriting a squad full of locals, as had been the norm in Limerick for the previous two decades due to financial constraints, Scully was credited by many of his former players with changing the mindset at the club.

His first full term in charge of the club was the 2010 season and with a largely Limerick based squad including Robbie Kelleher, Shane Clarke, John Tierney, Thomas Lyons and Jeffrey Judge, all of whom are plying their trade in the Limerick District League currently, the Super Blues finished five points outside the top three and a play-off place.

The First Division was a different animal at the beginning of the decade with the likes of Derry City, Shelbourne, Waterford United, Cork City and Monaghan United competing in an ultra competitive league in 2010.

With the names mentioned above, people may think Limerick should have finished higher than fifth but in reality, those players were coming to the end of their careers and were only involved in the league for a short period of time following their departures.

Despite reports to the contrary, young talent were afforded first-team opportunities under the former Shelbourne man as the likes of Garbhan Coughlan, David McGrath and current Pike Rovers player Steve McGann featured.

A whopping 34 players were used by Scully throughout the season and it was this inconsistancy of selection which may have caused problems with very few players considered as mainstays in the team.

The downfall was the team’s form both home and away against their top six rivals, Just 3 wins from 15 matches against their five promotion rivals, two of which came against fourth place Shelbourne and one against sixth place Cork, was pretty dismal when you consider just two more wins from the remaining 12 of those encounters, would have secured a play-off spot.

Below is a full list of 34 players used by Pat Scully throughout the 2010 season.

With an exceptionally busy pre-season and transfer window which saw the arrival of no fewer than ten players including the vastly experienced former St. Pats duo Barry Ryan and Sean O’Connor, expectations soared through the roof for 2011.

At this juncture, it was clear that O’Sullivan was giving significant backing to Scully with the likes of John Frost, Chris Breen and Brian McCarthy also joining the club in a bid to finally achieve promotion after almost two decades. The team appeared to be heading in a different direction.

There were still many locals present but with the likes of Shane Clarke, John Tierney and John Boyle making way for seasoned League of Ireland players, it was clear that patience was running out and the management team craved promotion.

This is not a criticism of the players above but there was always a frustration as a supporter of Limerick as many people argued that local junior players were better than players brought in from other League of Ireland clubs.

In reality, this was not true and Scully was aware of this. Unfortunately, the former Kilkenny City manager could not avail of a conveyor belt of talent coming through an academy, which is still lacking in the city to this day although football men like Noel O’Connor have addressed this in recent months.

It is very difficult to be critical of the team as they finished just three points behind league winners Cork City but sensationally also missed out on a play-off spot by one point. Monaghan finished above the Shannonsiders but only after they were controversially awarded three points which they did not earn on the pitch after Finn Harps were judged to have fielded an ineligible player in a 1-1 draw with Roddy Collins men.

We were full of bitterness and regret following the decision but when you look at it pragmatically, that group should have reached the play-offs regardless. Midway through the season, Limerick signed Joe Gamble and Denis Behan and this was a major statement of intent. However, in the duo’s first game, Limerick lost 0-2 at home to Monaghan in a lethargic display which ultimately cost them.

I think of a 0-1 loss at home to Wexford or the 1-1 draw against Salthill Devon and sigh. Two really poor results with the squad at Scully’s disposal. While it feels very harsh to render the season a failure due to the fact that an off-field decision was the difference, one feels that Limerick should never have left their destiny out of their own hands and as a result, we had to wait 12 months to get our hands on the holy grail.

With the First Division reduced to eight teams for the 2012 campaign and with a very experienced squad at his disposal, Scully was expected to deliver promotion with relative ease. Following the previous years near misses and considering Pat O’Sullivan had backed the former Shelbourne man in the transfer market once more, Limerick were rightly installed as favourites.

The team won 20 games on their way to the title but it wasn’t as straight forward as it appeared. Needing a point in the penultimate game of the season against Longford, the Super Blues win 0-2 and the celebrations began as promotion was achieved after 19 years.

Scully’s team continued to flounder against their top rivals and incredibly lost on four occasions to runners-up Waterford United. Despite only winning two games from eight against both Waterford and Longford, it failed to take the gloss off the title victory.

At the end of the season, Scully decided to part ways with the club although the mystery behind his departure has never been solved. Club officials stated that the decision was made by Scully to leave the club but sources close to the former central defender, are of the impression that tensions had been building for months between both parties.

It is difficult to say and we are just speculating, but it is possible that the club’s hierarchy were unimpressed by Limerick’s form against their more illustrious rivals during Scully’s reign. Also, it was hard to shake off the disappointment of missing out in 2011 although as previously mentioned, an off the field decision was crucial and cost Limerick.

We must not underestimate Scully’s role in changing the attitude of everyone at the club. After his arrival, he was able to recruit seasoned professionals albeit with the financial aid from O’Sullivan.

Also, players accredited their improvement to the high standards that he demanded from them. Ultimately, he achieved the main goal; promotion to the promised land and it was a pity that he couldn’t take control of the team upon their return to the top flight.