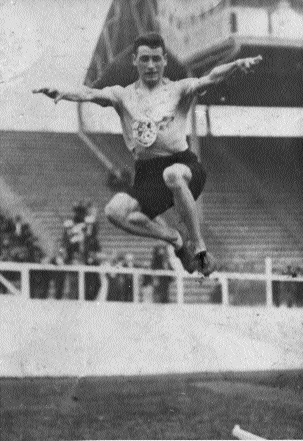 WHAT research tells us is that sibling rivalries often produce great results, but to have one child in a family go on to reach a world stage is fantastic, but what about having two?

You will have to go to the small town of Athea in Limerick in discover the Ahearne Brothers, who excelled on the world stage as jumping athletes.

Tim and Dan Ahearne dominated the world of long jump and hop, step and jump (now known as Triple Jump) at the turn of the last century.

The pair grew up alongside their older brothers William and Mick, all of which contributed to the family farm growing up in Athea, County Limerick.

They attended Saint Michaels College in Listowel which provided an outlet for Sports within the school, as well as various Sports meetings. Both Tim and Dan also played Gaelic Football for local club Athea.

At the age of 18 in 1904, Tim won two competitive jump events in Listowel. Those victories would kickstart Tim Ahearne’s road into competition and would drive him on the bigger things.

As he began to build on his success in the years that followed, 1907 would prove to be an exceptional one when he took home the All-Round Championship of Munster in Fermoy, the GAA Long Jump title and a further 16 first prize wins in one year.

However, the Triple Jump at the fourth Summer Olympic Games in London on July 25th, 1908 would prove to be the jewel in the crown for Tim Ahearne.

The Athea man’s achievements in London was well documented by author and sports writer David Guiney, in his book – Silver, Gold, Bronze.

According to his obituary in the New York Times in 1918 he was considered “The best Athlete the United States has ever known” and for good reason – he was a multiple Olympic champion in a variety of events including, Discus Throw, Shot Put and Standing Long Jump.

The main “contenders” for the event were Eric Larsen (Norway), Calvin Bricker (Canada) and Platt Adams (USA). Larsen cleared 48 feet in the weeks leading up to the games, while Bricker and Platt were National title holders respectively.

A hop skip and a jump and Ahearne found himself laying at the far end of the pit, optimistic. Many minutes followed as officials measured and re measured the distance. Tim Ahearne from Athea, County Limerick had set a new Olympic and World record of 48 feet, 11 ¼ inches (14.92 metres) and was crowed Olympic champion! At 22 years old, he was the youngest Gold Medal winner of the 1908 games.

With Olympic Gold in his back-pocket Tim and his brother Dan immigrated to New York with their family in 1909 where the “e” from Ahearne was dropped. According to various sources, this was down to a clerical error in the days of “rushed paperwork”, hence the variation in the brothers’ surnames.

In an almost passing of the guard, Dan Ahearn would begin his own run of success in Athletics with a goal in mind – to become a Triple Jump world record holder.

In the summer of 1909, he established several new records for the Triple jump, but the Amateur Athletic Union threw them out on technicalities.

In July 1909, he succeeded in getting his name on the record books by creating a new Triple Jump world record with a distance of 50 feet 2 inches.

The brothers dominated at National level, Tim placed second at the US AAU Championships in the triple jump in 1911, 1913-14, and 1916, each time finishing runner-up to Dan who won a total of eight US AAU titles over a period of nine years.

Even though Dan Ahearn was the best Triple Jumper and record holder at the time, he was not naturalised citizen of America as he did not hold US citizenship and therefore could not compete in the 1912 Olympic Games in Stockholm.

Meanwhile, Tim decided not to defend his Olympic title for Great Britain.

Dan eventually got to compete on an Olympic stage in Antwerp in 1920 where he represented USA. He finished sixth in the Triple Jump final and performed nowhere near his best. So much so that he’s world record for the event remained intact for a further four years.

In the years that followed, Tim returned to his farming roots after his athletics career and settled on a farm in upstate New York, where he raised prize-winning pedigree cattle. He died in November 1968 aged 83. Based out of Chicago, Dan became a policeman and died on December 20th, 1942 at the age of 54. Two of Athea’s famous sporting sons who jumped for glory and achieved just that. Tim and Dan Ahearne rank among Limerick’s greatest Athletes.

The post The Athea Brothers who took on the world and won appeared first on Sporting Limerick.