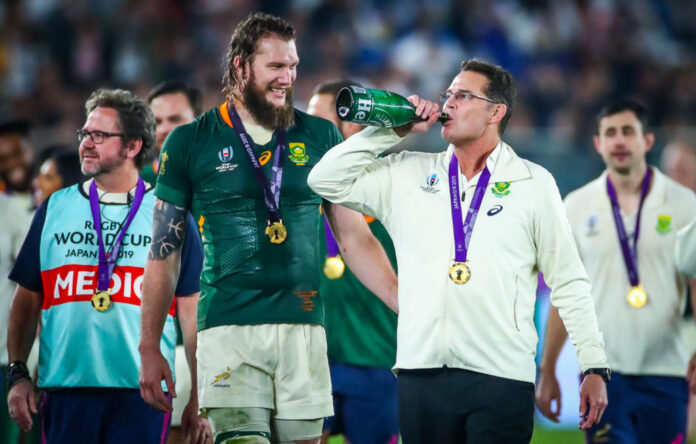 Nine players will join the Munster senior squad next week with the team returning to training in small groups at the High Performance Centre in Limerick on Monday.

Five of the players are graduates of the Greencore Munster Rugby Academy with four newcomers joining the club.

Roman Salanoa joins from Leinster and moved to the province in recent weeks with Matt Gallagher, an addition from Saracens, currently completing his two-week self-isolation period.

The average age of the nine new additions is less than 23, see their player profiles below.

Starting six of his seven appearances at the 2019 World Cup, he scored important tries in the knock-out wins over Japan and Wales. His attacking form was matched by a physical defensive display as he made his presence felt at every stage with a huge work rate from midfield.

From Cape Town, he has made 47 appearances for the Springboks, scoring six tries. He previously lined out for the Stormers and was voted South African Super Rugby Player of the Year in 2015

25-year-old RG Snyman featured in every game of South Africa’s successful World Cup campaign, producing a man of the match performance against Canada.

The imposing lock is highly regarded for his athleticism, ball handling skills and towering presence in the lineout.

A product of the Bulls, he has made 23 appearances for South Africa and makes the move from Japanese club Honda Heat

A former Saracens Academy Player of the Year, he was part of the England U20s Junior World Championship winning side in 2016.

Hailing from London, Matt is Irish qualified as his paternal grandmother and grandfather are from Limerick and Derry respectively. In December he lined out against the province in the round three Champions Cup encounter at Thomond Park.

He progressed into the Leinster Academy in 2018, and the 22-year-old has made three Guinness PRO14 appearances for the province this season before making the move to Munster

In advancing from his final year of the Greencore Munster Rugby Academy, Jack O’Sullivan is being promoted to the senior ranks after signing a three-year contract.

The back row is first cousin to brothers Rory and Niall Scannell. Having missed the majority of the 2018/19 season through injury, the 21-year-old showed a glimpse of what’s to come when he marked his first senior appearance with a fantastic solo try against London Irish in pre-season.

He has since made seven competitive appearances in red, including his Champions Cup debut against Ospreys in January.

21-year-old Keynan Knox has been promoted to the senior squad having joined the Greencore Munster Rugby Academy in 2018.

The South African native made eight senior appearances during his time in the Academy and has also featured for Young Munster in the All Ireland League.

22-year-old Alex McHenry progresses to the senior squad after three years in the Academy.

A product of CBC and Cork Constitution, the centre made his Guinness PRO14 debut away to Benetton last April and has scored four tries in 14 Munster A appearances in the Celtic Cup and British & Irish Cup.

21-year-old Cashel native Diarmuid Barron has been promoted to the senior squad after two years in the Greencore Munster Rugby Academy.

A product of Cashel RFC and Rockwell College, Barron made seven Guinness PRO14 appearances as an Academy player with his debut coming away to Cardiff Blues in September 2018.

The hooker is a former Ireland U20 international and plays his All Ireland League rugby with Garryowen.

23-year-old Liam Coombes hails from Skibbereen and has been promoted to the senior squad after three years in the Academy.

The winger made an impressive try-scoring debut against Cheetahs in Bloemfontein in November 2018 and has made four appearances at senior level.

Liam is a product of Skibbereen RFC and CBC and plays his All Ireland League rugby with Garryowen. He joins first cousin Gavin Coombes in the senior squad.