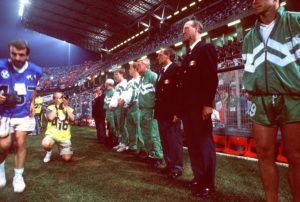 LAST Saturday, the country lost a sporting hero as Jack Chrlton sadly passed away at the age of 85.

The former Leeds United legend and World Cup winner guided Ireland to back-to-back World Cups in Italy and America in 1990 and 1994.

Tributes have been pouring in over the last number of days to pay respect to Charlton.

As a result, the FAI have opened a ‘Virtual Book of Condolence’ where football supporters can express their sympathies to the family of the late Jack Charlton.

“The national outpouring of grief since Jack’s death was announced on Saturday morning has been phenomenal and reflective of the esteem in which Jack was held here in Ireland.

“We are offering Ireland fans the opportunity to extend their sympathies to Jack’s family online and to show the family just how much Jack meant to all of us here in Ireland.”

The Book of Condolence will remain live until Monday, 27 July when the FAI will share the messages with the Charlton family.

The Book of Condolence is live at fai.ie/jack-charlton-rip

The post Tributes continue to pour in as FAI open online book of condolence for Jack Charlton appeared first on Sporting Limerick.