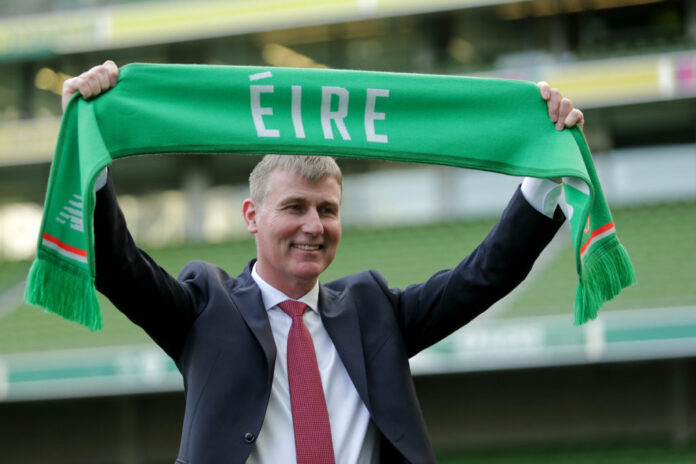 As Stephen Kenny takes over the Republic of Ireland reins, there is hope that the young players coming through will get a chance to prove themselves on the highest international stage.

There is promising talent all over the pitch with goalkeepers Caoimhín Kelleher and Mark Travers making names for themselves at Premier League clubs.

Defenders Lee O’Connor and Nathan Collins recently earned their first international call-ups while a horde of strikers are threatening to break into the side.

Aaron Connolly, Michael Obafemi, Troy Parrott and Adam Idah are four names on the tips of every Irish fan’s tongue. They have just four senior caps between them but there’s no doubt that number will soon increase.

The Brighton and Hove Albion striker burst onto the scene last October with a scintillating performance against Tottenham Hotspur in the Premier League. Making his first start at that level, Connolly scored his first two league goals in a 3-0 victory. In his 23 PL appearances to date, he has failed to register another goal but that isn’t allowing the hope to fade.

Connolly is a pacey, tricky and nimble centre-forward. He used his youthful exuberance to bully Tottenham’s experienced backline last October, and though we haven’t seen any performances to this standard since, we have seen more glimpses of the quality the youngster possesses.

We saw his passing ability when he assisted Neal Maupay’s injury-time winner against Arsenal in June. Three days later, his speed and agility caused problems for Leicester’s James Justin who ultimately conceded a penalty to the Galway man.

Comparisons to Robbie Keane may be premature, but the hope and excitement are warranted.

Connolly has been capped twice by the Republic of Ireland. He made his debut as a late substitute in the goalless Euro 2020 qualifier with Georgia in October 2019. He started three days later in Switzerland as Mick McCarthy’s men suffered a damaging 2-0 defeat.

However, Connolly’s time under Kenny with the U21’s and recent comments from the new senior manager will give hope to the former Mervue United man that he will feature in green a lot more:

“I think that Aaron can play anywhere across the front three because, most likely, we won’t be playing with a front two. Aaron with his close control with his back to goal is actually exceptional. He really looks after the ball, he is not just a fellow who runs in behind.”

Obafemi’s name is certainly fresh in the minds of football fans after his dramatic late equaliser at Old Trafford for Southampton on Monday night. That was Obafemi’s fourth Premier League goal on his 25th appearance.

His two assists in that time is double that of Connolly in just two more games. The 20-year-old striker has also scored against Chelsea and West Ham this season, with his first PL goal coming against Huddersfield last season before a hamstring injury saw him play just 20 minutes during the second half of the season.

The majority of Obafemi’s appearances have come from the bench this season. Golden Boot-contender Danny Ings is on top form and new signing Che Adams is proving difficult to knock out of contention despite just one goal this term.

Yet, Obafemi’s pace and energy makes him a nightmare for opposition defenders to deal with, as his high pressing and runs in behind off the bench capitalise on already tiring defenders.

Of the four strikers mentioned in this article, Obafemi is the one who has spent the least amount of time working with the incoming manager but that is not to say he hasn’t caught Kenny’s eye:

“The other young player is Michael Obafemi there at Southampton who I’ve only had for two games, he’d been injured. He score a couple of very high profile goals for someone so young – he’s done very well for Southampton. We’ll have to see how they progress.”

Stephen Kenny to Off the Ball [via punditarena.com]

The Spurs striker is probably the man who excelled the most at the U21 set up with Stephen Kenny. Parrott found the net four times in as many appearances at that level.

However, at just 18-years-old, Parrott is behind his aforementioned counterparts in terms of Premier League experience. Parrott has just two PL appearances, making his debut as a substitute in a 5-0 win against Burnley last December.

The Dublin-born striker marked his Ireland U21 debut for Stephen Kenny with a goal against Armenia. He scored a brace in his second appearance against Sweden and picked up two yellow cards in the following game against Italy. His one cap at senior level came in a 3-1 friendly win against New Zealand last November where he provided the assist for Ireland’s second goal.

Parrott has struggled for game time at Tottenham, despite fans calling for him to be given a chance. Former Spurs manager Mauricio Pochettino had made the mistake of introducing young players to the first-team too soon and didn’t want to make the same mistake again. The Argentine also refused to loan the striker out as he is a believer in keeping his young players at the club to help them develop in a specific style of play.

The current Spurs head coach, Jose Mourinho, is known for keeping young players on the fringes but despite this he gave Parrott his league debut.

Parrott did miss a penalty in a shootout in his last appearance, an FA Cup defeat to Norwich however.

Yet again, Stephen Kenny had plenty of praise for this young striker:

“For me, Troy Parrott has only played four games, he’s scored four goals, and I haven’t even played him up front yet! He’s played off the left or as a #10 and he’s just a very instinctive, natural goal-scorer, an interesting player with a great attitude.”

Stephen Kenny to Off The Ball [via punditarena.com]

Idah hasn’t had the easiest start to life in the Premier League. His Norwich side were relegated with three games remaining in the season. He has made ten PL appearances, nine of which have ended in defeat. He is yet to register a goal or assist in the league.

But, it would certainly be harsh to judge the 19-year-old on those pieces of information alone as he scored his first professional hat-trick against Preston in the FA Cup earlier this year in what was just his third senior appearance for Norwich.

Idah excelled at U17 and U21 level for Ireland. He netted 14 times in 22 appearances for the U17’s, while 12 games for the U21’s saw him score five. Kenny was keen to acknowledge the sensational start Idah had at club level:

“Obviously, Adam Idah had a spectacular introduction and not too many players get a hat-trick on their debut in the FA Cup. It was terrific.”

Stephen Kenny to Off the Ball [via punditarena.com]

With these youngsters coming through, Ireland boast strong attacking options for the first time in a while. Following the retirement of Robbie Keane and Jon Walters and the fading energy of Shane Long, the managers have struggled to replace the goalscorers in the team.

Throughout the Euro 2020 qualifying campaign, we managed just seven goals (three of which came against Gibraltar).

But the question for Stephen Kenny is: how does he best utilise the young players coming through while maintaining a balance with the experienced squad members still at his disposal?

Kenny has told us it is likely he will use a front three when international football is up and running again. He has an abundance of options on the left and up front, but is falling short on the right.

Both Parrott and Connolly can play off the left. Parrott has done so to great effect with the U21 side, and Connolly showed how effective he could be in a similar position as he played as a rather wide second striker against Tottenham last October.

The more experienced options are James McClean and Robbie Brady, despite the latter struggling for game time due to injuries over the last couple of years.

In the #9 spot, these four upcoming talents will look to stake a claim. They will have to fight off competition from David McGoldrick, Callum Robinson, Sean Maguire, James Collins, Scott Hogan and more.

Aaron Connolly would also be an option on the right, having played there for Brighton before. Jeff Hendrick’s name is also in the mix, but he is currently looking for a club having left Burnley at the end of his contract last month.

Callum O’Dowda and Callum Robinson have been tipped to occupy this role in the past but it would seem they would be better suited to the role on the left, cutting in onto their favoured right foot. They would be far down the pecking order on that side though.

Crucially, Kenny must balance the time he gives to the young four forwards. All of them have the potential to be huge players for Ireland going forward, but they all need the game time and experience to become as good as they can be.

Favouring one or more of these players could be detrimental to the development of the other. Troy Parrott, who is already struggling for any time on the pitch at club level, is perhaps the player who needs Kenny’s preference the most.

Stephen Kenny has big decisions to make, but this is the type of headache managers love to have. Young, energetic talent is rearing to go and looking to spur Ireland on to a new era.

Is Stephen Kenny going to help them realise those expectations?