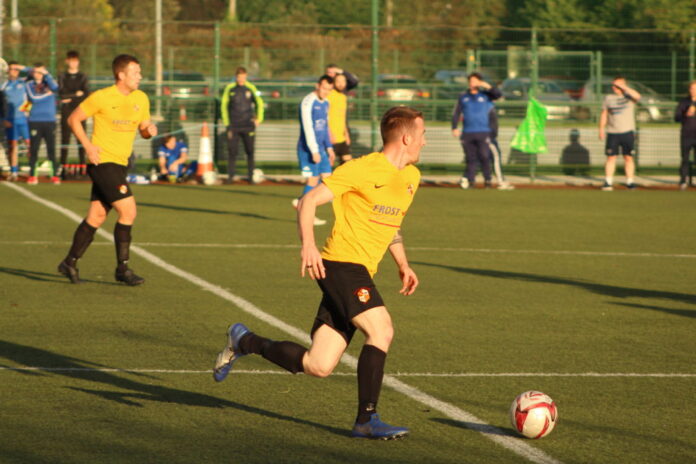 Aisling Annacotty reached the final of the Munster Junior Cup on Sunday afternoon following a hard fought 3-1 victory over Waterford Crystal (AET). Shane Clarke, an own goal and a Conor Coughlan sent them through to face fellow Limerick District League Premier Division side Fairview Rangers in the decider.

Annacotty began the game brightly and a cross from Shane Clarke found his brother Thomas at the back post but the centre-back volleyed wide. Shortly afterwards, the lively Waterford left winger Jake Mooney’s speculative curling shot caught Brian O’Connor by surprise and hit the post.

The Suirside outfit should have taken the lead midway through the first half but for the quick reflexes of O’Connor to deny Andrew Power. From the resulting corner, Nathan O’Callaghan conceded a penalty for an apparent push but Jake Mooney struck the post with the spot-kick.

Right on the stroke of half-time, Shane Clarke fired wide from a free-kick and it proved to the last action of the first half.

The lead did not last long as Shane Clarke headed a cross to the top corner. The drama didn’t end there as goalkeeper Dean Purcell was sent off during Annacotty celebrations for an off the ball incident involving Aaron Murphy.

The sending off did not deter a dogged Waterford Crystal side and they came close to restoring their lead when dangerman Jake Mooney attempted to lob O’Connor but the netminder tipped the ball out for a corner.

With just one minute remaining in normal time, Aisling were lucky as Andrew Power beat O’Connor to a free-kick delivery and scored but he was adjudged to have been in offside position and the goal was disallowed. For the second day in a row, the game had reached extra-time.

Shane Clarke and Shane Tracy had two chances for Annacotty in the first period of extra-time but neither were able to convert. Just as it looked like the game was destined for a penalty shoot-out,

Conor Coughlan’s cross deceived everybody and struck both post and goalkeeper before ending up in the net. With the final kick of the game, Coughlan converted from a Clarke pull-back to ensure victory.

The all-Limerick final will now take place in Jackman Park next Sunday at 3pm. Both clubs will receive limited tickets due to the COVID-19 restrictions.