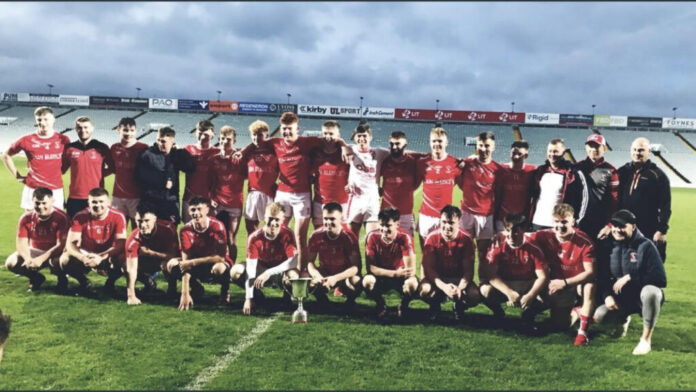 DOON are Premier U-21 Hurling champions for the second year in a row following a 0-18 to 0-17 victory over Patrickswell at the LIT Gaelic Grounds.

After an enthralling contest it was the east side that came out on top with substitute Jack Downey contributing two late points that help earn the win.

The sides were level 10 times throughout but Doon went two points up in added time through Downey and Adam English.

Jason Gillane reduced the margin to one moments later, however, time ran out for Patrickswell and they were unable to level.

Two early Gillane frees had the ‘Well in front but efforts from Bob Purcell and Cian O’Donovan levelled the game at 0-3 apiece after seven minutes.

It was a tale of expert free taking between Doon’s Jack Ryan and Patrickswell’s Gillane throughout but there was also plenty of excellent points from play.

Doon led by two points on the 20 minute mark and looked to be getting into their stride.

However, Patrickswell, through Gillane and Josh Considine made sure that gap was soon clawed back.

John Kirby was also in sparkling form with three well taken scores for Patrickswell in a first half that saw the sides at 0-11 each after 30 minutes. Jack Ryan put over six, while Gillane raised five white flags.

Doon made a flying start to the second half with Ryan, Dubhan O’Grady and Cian O’Donovan putting them three clear.

Patrickswell, to their credit, came back once again with Patrick Kirby and two Gillane frees levelling the game for an eighth time.

The sides remained deadlocked going into the final stages with John Kirby landing a fourth point that was immediately cancelled out by a superb Cormac Ryan long range free.

Downey then put Doon in front and a well taken score from English proved decisive as Paddy Coleman’s men landed their second title in as many years.

The post Delight for Doon after win over Patrickswell in Premier U-21 Final appeared first on Sporting Limerick.