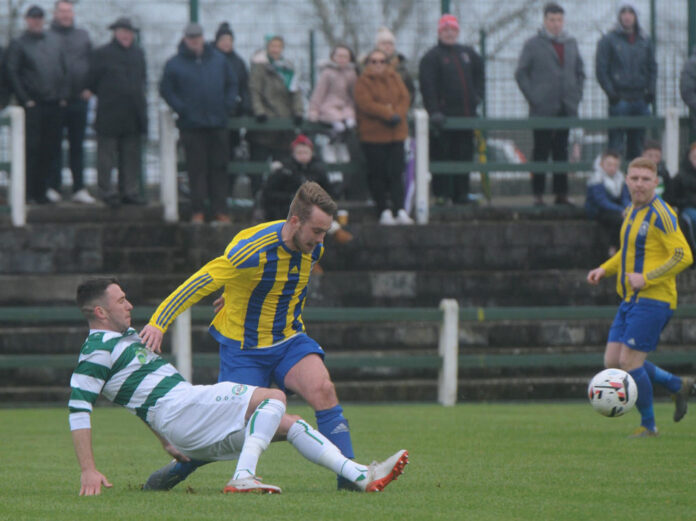 There were five matches down for decision but the game between Aisling Annacotty and Mungret Regional due to take place in Annacotty, was called off as a precuationary measure as an Aisling Annacotty player is awaiting the results of a test for COVID-19.

However, the second postponement was much less amicable and has led to unrest in both camps. Early reports suggest that Janesboro Football Club were uncomfortable with facing tonight’s opponents Regional United at Pearse Stadium as there was a confirmed case of COVID-19 at the Dooradoyle club in recent weeks.

Regional United had turned up to Pearse Stadium to find that the gates were closed and no game was to take place. As stated, early reports suggest that Janesboro were unwilling to take the risk in facing Tom O’Connell’s side. Regional are adamant that the person who tested positive for COVID-19 had not been on club grounds since August 4th, 16 days ago and was not involved at junior A level.

Paddy O’Malley doubled the lead before half-time. Patterson doubled his account with a great individual effort before Shane Walsh finished the scoring with a good finish from a searching ball over the top pf the defence by Danny O’Neill. It was a positive first night for Robbie Williams as he looks to challenge for the title once again this season.

Ballynanty Rovers also made a strong start as they dismantled Coonagh United 7-1 at LIT. Connor Ellis (x3), Alex Purcell, Ger Kelly, Derek Daly and Adrian Power accounted for the goals for Dave Dunphy’s side in a new era under his stewardship.

Nenagh AFC had a good start under Cillian Fitzpatrick and Dearan O’Gorman as they beat Kilmallock 4-0. Nathan Kelly (x2), Jamie Bergin and Danny Butler provided the Tipperary based outfit with the win.

Unfortunately, the main talking point is the lack of a game at Pearse Stadium. It is clear that further specific protocols will now have to be put in place to inform clubs about their responsibilities when dealing with either a confirmed or suspected case of Covid-19 and how long they must be inactive for to avoid risk and to re-assure opposition clubs.

The post Wins for Pike, Nenagh and Ballynanty on opening night appeared first on Sporting Limerick.