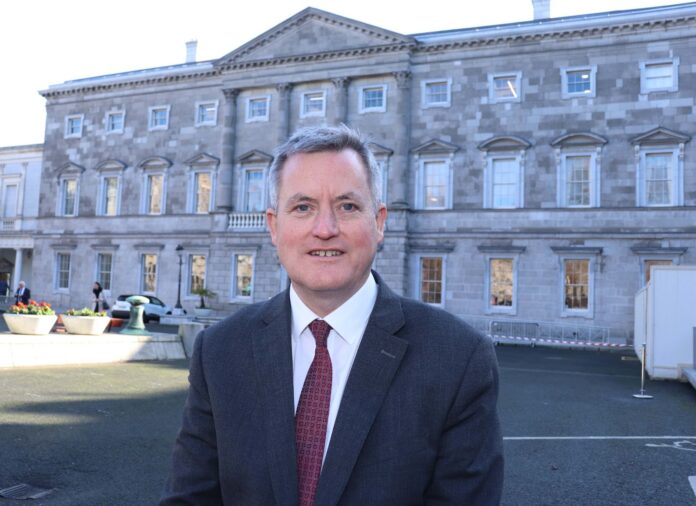 LIMERICK Fine Gael TD, Kieran O’Donnell has been appointed as the Chair of the newly established Oireachtas Committee on Transport and Communication Networks.

Deputy Kieran O’Donnell said he is “delighted and honoured” to be appointed to the role on the committee:

“I look forward to taking on this exciting role of Chair and working with my colleagues on the committee in the interests of public accountability, progressing issues that impact on the daily lives of people and to ensure effective scrutiny of legislation in the areas set out under its remit.”

The Fine Gael TD said one of the main reasons influencing his decision to take the role as Chair of the committee is “that it cover areas that greatly impact on Limerick and this region, including Shannon Airport & Group, Shannon Foynes Port Company, all road & public transport infrastructure, including the M20 and the roll-out of broadband”.

“I will be proposing a significant programme of work for the committee that will seek to address many of the major issues facing the country which have been intensified by the COVID-19 pandemic,” he said.

The Fine Gael Deputy noted one of the major issues being the future of aviation travel and policy in Ireland, which he described as a “key concern for us in this region with Shannon Airport”. Deputy O’Donnell said he will also seek continued progress of the M20 motorway project “which I believe is vital to balanced regional development”.

“Remote working has now become part of the fabric of working life across many sectors in the economy – the roll out of the National Broadband Plan(NBP) has to respond to this substantial shift to working from home,” he said.

“Faced with this COVID environment, I would be proposing that our committee will engage with relevant stakeholders in seeking a roadmap on fast-tracking the implementation of the NBP.

“In my role as Chair, I also look forward to engaging with individuals and groups who may wish to bring important policy initiatives before the committee for debate and consideration.