COVID-19 test facilities have been increased in Limerick as speculation mounts of a possible local lockdown after a surge in confirmed cases.

In the past eight days, 70 confirmed cases were announced locally, sparking a warning from Acting Chief Medical Officer, Dr Ronan Glynn, that NPHET was “monitoring with growing concern the number of cases nationally, particularly in Limerick”.

While publicans welcomed the government decision to re-open all pubs from September 21, fresh doubts were raised over whether pubs could reopen in Limerick because of the sustained rise in cases locally.

The HSE has opened an additional Covid 19 testing facility at St Joseph’s Health Campus on Mulgrave Street, increasing the number of test bays from three to seven.

The new centre will cater for up to 700 tests a day if demand requires, offering free testing for anyone who is referred by a GP.

A HSE spokesman said that those attending the centre have been urged not to travel there by taxi or public transport and to adhere to social distancing and wearing a face-covering throughout (including travelling to and from the testing centre)”.

Local Community Healthcare Chief Officer Maria Bridgeman, added: “It is important the public continue to adhere to all public health guidelines as the HSE continues it’s response to Covid 19.”

The city test centre will be operational from 8am to 8pm seven-days-a-week from this Thursday morning.

It comes as patients presenting with minor injuries at the emergency department at University Hospital Limerick, were being redirected to injury units across the mid west region

Emergency Medicine Consultant Dr Gareth Quin said that physical distancing, infection prevention and patient streaming measures introduced at the emergency department will remain in place for the protection of patients and staff as Covid-19 remains an ever-present threat“.

“Given the high attendances and admissions at the emergency department, it’s necessary for most of the measures introduced at the peak of the pandemic to remain in place,” he added.

UHL confirmed that levels of presentations at its overcrowded ED were “surpassing pre-pandemic levels (a weekday average of more than 200 presentations)”, and that “it has become more important than ever for the department to be ring-fenced for emergency cases”. 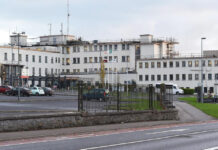