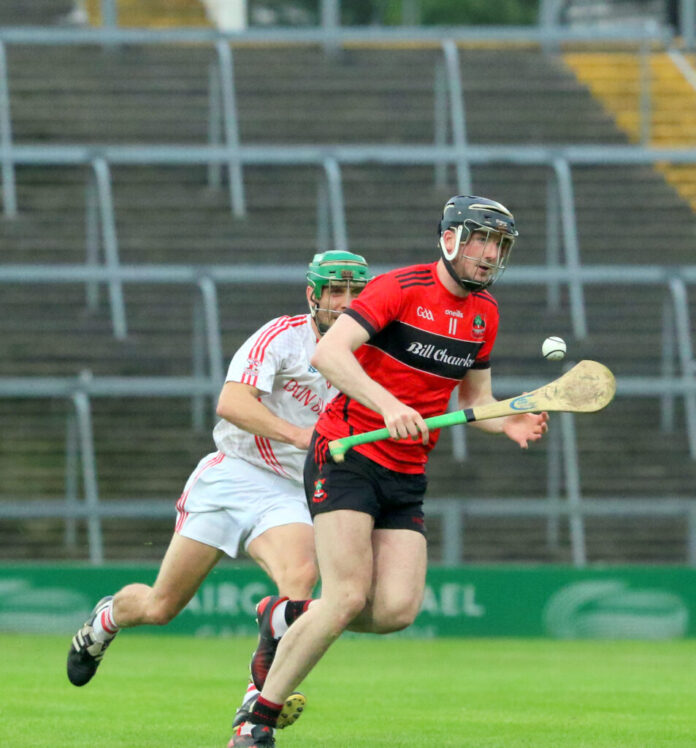 THE final pairing for the 2020 Limerick Intermediate Hurling Championship will be confirmed this weekend with both semi finals down for decision as well as the relegation final in the Senior and Intermediate grades.

Adare v Ahane on Sunday at the Childers Road at 1pm.

Murroe Boher v Garryspillane on Sunday in Bruff at 12pm

Feohanagh v Na Piarsaigh on Sunday in Croagh at 1pm.

Adare and Ahane meet to decide who will retain Senior Status on Sunday afternoon in the Childers Rd. Ahane only gained promotion last summer but are in immediate danger of dropping down at the first hurdle. They are without a point in 2020 after heavy defeats to Na Piarsaigh and Kilmallock in Group 2 of the championship.

They face an Adare side who have been impressive thus far, falling late on against defending champions Patrickswell before forcing a draw against Doon.

These sides last met in 2016 when Adare were 1-16 to 0-13 winners in Bruff in the group stages of the championship.

As such, Adare will be hot favourites heading into the game after showing real signs of progress in 2020.

However, in a one off game, Ahane will be desperate for another year at the top tier.

In a repeat of the 2017 Premier Intermediate Hurling Final, one of Murroe Boher or Garryspillane will return to the third tier after they meet in the 2020 Senior B relegation final.

Murroe Boher had a final day win over Monaleen after suffering a heavy defeat to South Liberties in their opener. Garryspillane drew their opener before falling to a 26-point defeat at the hands of Ballybrown.

Garryspillane have been decimated by injuries this year and if they are still short key men like James Ryan and Dylan O’Shea on Sunday, it pints towards a repeat result of their 2018 loss.

In the Intermediate championship, three of the last four are repeated from 2019 with a rematch of the semi final clash between Newcastle West and Croom

Feohanagh take the place of 2019 winners Glenroe and face Na Piarsaigh who play in the senior semi final the night before this game.

12 months ago, Newcastle West overpowered Croom en route to a 1-19 to 1-9 win. Yet while NCW had to much in the semis, Croom were 2-12 to 1-9 winners when they met in the group stages last year.

Newcastle come into the game with three wins from three after accounting fro Knockaderry and St Patricks in the groups before overcoming Pallasgreen 3-15 to 1-17 in the quarter-finals.

Croom on the other hand drew their opener with Granagh Ballingarry before defeating Hospital Herbertstown in the second round.

Newcastle’s superior form and experience last year should stand to them as they aim for a second consecutive final berth.

In the other game, Na Piarsaigh will be hopeful of having teams in both the Senior and Intermediate finals.

Regardless of the result on Saturday in the SHC, Na Pairsaigh will be keen to go one further than 2019 when they fell to Glenroe in the semi finals.

They seem to have grown from the experience and have been very impressive thus far with a 100% record from their three games.

They overwhelmed Kilmallock in their opener before beating Effin to seal top spot.

In the quarter-finals they beat a dogged Hospital Herbertstown by three to book thier place against Feohanagh. However, they will be hampered by the losess of Alan Dempsey and Cathal King who featured for the senior side last weekend.

The West side are in their second year at this grade since their relegation in 2018. After a disappointing maiden term in the division they have regrouped brilliantly with wins over Pallasgreen, Tournafulla and Knockaderry.

If they can recapture the form of 2017 when they were in the semi finals of the PIHC, then they should prove too much for Na Piarsaigh’s second side.

At the other end of the competition, one of St Patricks or Granagh Ballingarry will be relegated to the Junior Ranks.

St Patricks earned promotion to this tier after winning the Junior Championship in 2017, a year after losing the final to Na Piarsaigh. They meet a Granagh Ballingarry side who were senior as recently as 2014.

It certainly hasn’t gone to plan for these sides who are yet to pick up a win thus far.

Granagh Ballingarry will lament an opening day draw to Croom who are now in the semi finals.

St Pats fell to Newcastle West and Knockaderry in the group stages before losing out to Tournafulla in the relegation semi finals.

Granagh will be favourites having reached the semi finals of the competition in 2017 and 2018 but it’s all to play for come Sunday.