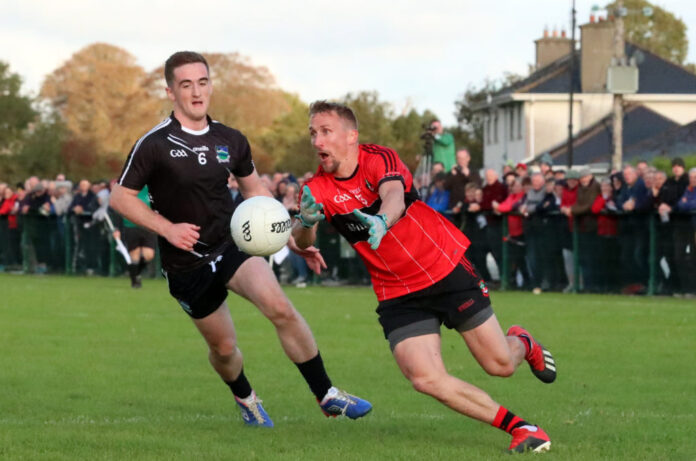 CHAMPIONS in 2017 and 2018, Adare’s three-in-row bid was undone by the Magpies 367 days ago. That game, also played in Mick Neville Park, was clearly still in the Adare minds as they turned out a fantastic performance to book their last four spot.

Newcastle West, for their part, were just 72 hours removed from their Intermediate hurling heroics, and contributed to an entertaining affair. The five point margin was as large as the lead was all night, with Harry Gleeson’s side clinical on the counter attack late on.

This game was tight throughout and particularly early on. Davy Lyons opened the scoring, before Ian Corbett leveled. The sides were level for a third time at the 15th minute water break, seven minutes after Shane O’Connor buried the games only goal into the top corner.

Adare’s ability to hold possession and be patient was rewarded when Robbie Bourke finished a top class team move on 25 minutes to level the game once again, this the second of four unanswered points for the men in red to close the half.

The half time score read Adare 1-6 Newcastle West 0-7. This was as close as the champions would get.

Half time substitution Jack English made an immediate impact – rasing a white flag. In response, Newcastle West scored through Mike O’Leary but Adare appeared in control.

Despite losing Shane Doherty to a deserved black card Adare held firm. Hugh Bourke and Diarmaid Moran Kelly traded points to leave the gap at a goal at the water break.

Mike Quilligan’s charges would only land two more points as the re-introduction of Mikey Lyons proved pivotal. The experienced forward, subbed off for English at half time, was reintroduced late on. He would kick the final three points for his side to keep the west rivals at bay.

The five point victory sets up a clash with Galbally. The south Limerick side defeated Oola, also on Wednesday evening.

The semi final draw is completed with the meeting of Ballylanders and Ballysteen.